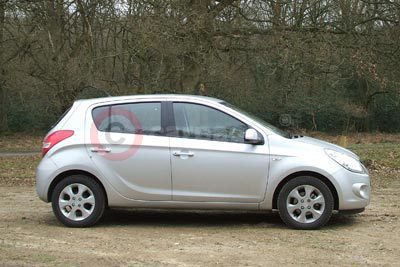 The Hyundai i20 1.2-litre Kappa engine is one of two petrol units - the other is a 1.4, which is the only one with the option of an automatic gearbox, every other engine, diesel or petrol, is mated to a five-speed manual, which can at times, be a little clunky in the lower gears. The only diesel option is a 1.4-litre engine but it comes with two outputs of 75- and 90-PS.

Smaller engined cars are no longer considered slow, and although the test car's vital statistics don't suggest blistering speed, the reality is quite surprising. The top speed is 103mph and apart from the 1.4 petrol at 112mph, this is much of a muchness throughout the range. It takes 12.9 seconds to get from nought to sixty mph, thanks to the 78PS produced at 6,000rpm and 119Nm of torque at 4,000rpm.

The rorty noise under acceleration gives the impression of an outright sportiness that the Hyundai i20 doesn't deliver. However, when it comes to overtaking at motorway speeds, there is still plenty in the small engine to complete the manoeuvre with speed and ease in fourth gear; and a little more leisurely, in fifth. More surprising is that at these speeds, the Hyundai i20 feels like it is capable of more than 103mph.

Overall, the car feels light but the power steering is responsive and nicely weighted, giving the impression of a more expensive car. It also adds to the enjoyment on fast roads, where the Hyundai i20 is surprisingly agile and adept; staying relatively flat on bends and generally not behaving as if it had a 1.2-litre engine under the bonnet.

Around town, some people might find that the clutch 'bite' is a little too high, with a tendency to drag the clutch after a change, which can make transitions a little abrupt. However, you soon get used to it and this environment is a good place to start the fuel consumption figures: 44.1mpg for the urban cycle, 62.8mpg for the extra-urban and the combined is a reasonable 54.3mpg, while tailpipe emissions for the test car are 124g/km CO2.

But there are other bonuses to buying a Hyundai, not least the 5-year unlimited mileage warranty and a 10-year anti-perforation warranty. According to motor industry and used car analysts, CAP, the Hyundai i20 is set to retain up to 47 per cent of its original value after three years and 30,000 miles, and BIK is around 13 per cent.

Just like the Hyundai i10 and i30, the Hyundai i20 is well worth a look for people who want piece of mind, are downsizing or just want a nice, easy, predictable car to drive, with a little fun thrown in, sometimes.

This is a 11-year+ news article, from our Hyundai archive, which dates back to the year 2000.

If in doubt check with your local Hyundai dealer as car prices and technical data will have changed since 2009.

Hyundai i20 Images may not be UK specification cars. Colours and exterior and/or interior elements may differ from actual models.