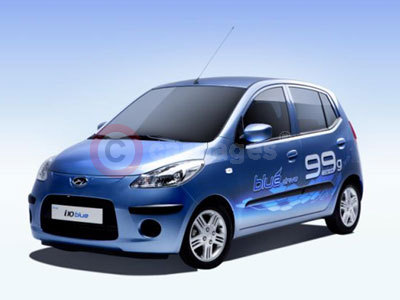 Hyundai has revealed its latest eco-focused Blue Drive vehicles. Four new cars have resulted from the company's leading-edge program: the Hyundai i10 blue, i20 blue, i30 blue and ix35 blue.

A noticeable change from the driver's perspective is the application of a Hyundai-specific Idle Stop & Go (ISG) system. This cuts the engine when the car is stationary and restarts it when the clutch pedal is depressed.

With ISG, an alternator management system is added to maximise energy regeneration during braking and disconnecting the alternator when it's not needed.

It's not just the engines which are more efficient. To minimise drag, the Hyundai Blue Drive models have improved aerodynamics and lower rolling resistance.

Under body panels have been installed on all Hyundai models to smooth airflow under the car and certain models also feature reductions in brake-pad drag on the discs. Wheels are also fitted with low rolling resistance tyres, inflated to a higher pressure.

Through such innovations, engineers have succeeded in lowering the CO2 emission levels of the Hyundai i10, Hyundai i20, and Hyundai i30 blue models to the sub-100g/km range.

The Hyundai i10 blue, which goes into production at the end of 2010, employs a new and extremely efficient 1.0-litre version of the Kappa petrol engine, which produces 69PS at a lower rpm level of 6.200 rpm while generating 94 Nm of torque. By tweaking the aerodynamics and refinements to the powertrain, CO2 emissions in the i10 blue have been reduced to just 99g/km.

The Hyundai i20 blue features the U2 1.4-litre diesel engine, designed and engineered at the R&D centre in Russelsheim, Germany, and produces 75PS at a lower rpm level of 4.000, while generating 220 Nm of torque. The power train is mated to the latest six- speed manual transmission. Producing just 98g/km of CO2 emissions, the Hyundai i20 blue is scheduled to go into production in 2011.

The Hyundai i30 blue uses the U2 1.6-litre engine, which produces 90PS at 4.000 rpm, while generating 240 Nm of torque. CO2 emissions of just 98g/km and 99 g/km for the hatchback and estate models, respectively, will save customers tax and fuel. Production commences in 2011 at the Nosovice plant in Czech.

The Hyundai ix35 blue, which goes into production at the end of 2010, boasts an extremely impressive CO2 emissions figure of just 135g/km, positioning it not only as a rival to leading C-segment SUV models but also to C-segment hatchbacks.

Another Hyundai ix35 on display has taken CO2 emissions from the exhaust out of the equation altogether. Theix35 Hydrogen Fuel Cell Electric Vehicle, making its debut of the show, moves Hyundai another step closer to the commercialisation of hydrogen fuel cell electric vehicles.

The Hyundai ix35 FCEV incorporates several important innovations over the previous generation Tucson FCEV. And with these improvements, Hyundai is set to meet its goal of ramping up production volume of FCEVs into the thousands by 2012.

This is a 11-year+ news article, from our Hyundai archive, which dates back to the year 2000.

If in doubt check with your local Hyundai dealer as car prices and technical data will have changed since 2010.