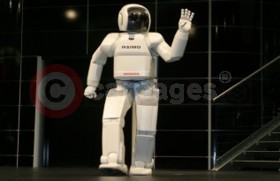 It can walk down stairs, push a trolly, pick things up and even turn light switches on and off.

The robot, called Asimo, which stands for Advanced Step in Innovation Mobility is one of the most advanced in the world and has been developed by Honda engineers in Japan who have been studying mobility and robotics programmes.

Now Asimo is to be used as an ambassador for Honda technology and Honda plans to bring it into the UK in the next couple of months to take round schools to demonstate how robotics can be put to use.

It mad its European debut at this week’s Frankfurt Motor Show and was the star of the show on the Honda stand with its daily appearance on the catwalk.

Honda UK spokesman Paul Ormond said: "The development of Asimo is not a gimmick but a serious technology study to broaden the experience and knowledge of the company’s engineers. It is also an ongoing development which could one day lead to quite important uses."

These include using such robots in dangerous situations such as bomb disposal work, but Honda insists it will not be used to replace humans in the workplace.

Ormond added: "Each operation has to be carefully programmed by an operator, even each step when walking down stairs for example."

Honda also want to ensure children are not frightened by the robot, it stands just 1.3 metres tall, which research has apparantly shown, is the optimum height to be "non-threatening".

"Being approached by a seven foot tall robot would be threatening in anybody’s eyes, let alone children," added Ormond.

Asimo will first be shown to the 4,000 strong workforce at Honda’s Swindon factory at a open day before doing the rounds of the schools.