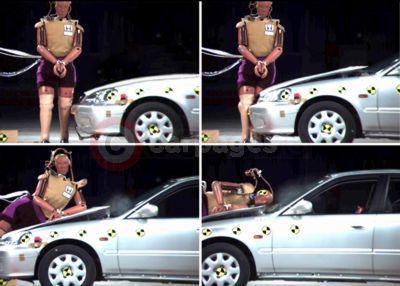 Honda has done it again with another safety first. Back in 2001 it was the first manufacturer to gain three Euro NCAP pedestrian safety stars by developing a crushable bonnet which created a cushion of air between the bonnet and the engine bay.

Honda has now developed a car bonnet which automatically pops up in a collision with a pedestrian. It is designed to reduce the severity of pedestrian head injuries by providing more clearance between the bonnet’s outer skin and unyielding engine parts beneath it. This lessens head injuries, dramatically increasing the chances of survival of both adults and children.

Honda estimates that the pop up bonnet could reduce pedestrian casualties by around 10%, with the number seriously injured cut by around 5%. These numbers may not sound dramatic, but they need to be seen in the context of almost 1000 pedestrian and cyclist fatalities each year, in Britain alone.

Addressing one of the major concerns of the Euro NCAP chairman’s report, the pop up bonnet can achieve an approximately 40% reduction* in HIC (Head Injury

*Based on Honda in-house measurements using a head impactor device Criteria) values according to Honda’s internal research. This achieves a higher level of pedestrian safety performance even in models where design considerations make it difficult to provide ample clearance between the bonnet, the engine and other hard components.

The news has been welcomed by leading organisation ROSPA, whose road safety department has long campaigned for better safety for pedestrians and cyclists on Britain’s roads. "We are very pleased to see Honda developing innovative ways of reducing the severity of injuries to pedestrians. Improving pedestrian protection is vital," said the organisation’s Road Safety Adviser Kevin Clinton.

The pop-up bonnet uses three sensors located inside the front bumper and a vehicle speed sensor to determine if an impact with a pedestrian has occurred, then signals an actuator to raise the rear portion of the bonnet approximately 10cm. This provides a space between the bonnet, the engine and other hard components to reduce pedestrian head injuries.