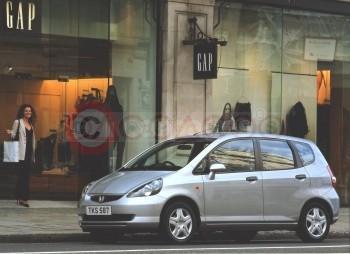 Today (17 July) the Honda Jazz is voted "Car of the Year" by Britain’s best selling weekly motoring magazine, Auto Express. The Jazz not only wins the Supermini category against the cream of the crop of today’s small hatchbacks in the publication’s New Car Honours, but it gains the highest accolade of all, that of "Supreme Honour".

The award was presented to Honda (UK)’s director and general manager, Ken Keir, by the magazine’s editor-in-chief, Dave Johns.

He said: "Our winner this year is a car charged with taking its maker into a new area of the market. It’s a machine that impressed us with its style, innovation and refreshing sense of fun. Although the Jazz range is small in comparison to some of its rivals, the model is a fantastic piece of packaging that answers its design brief to the letter and introduces a host of new ideas to an area of the market already overflowing with new metal. The new Honda is a car that has already ruffled feathers within the industry thanks to its spacious interior, high tech powerplant and fabulous build quality," he added.

Auto Express’s road testers were just as enthusiastic. Below are the words of road test editor Oliver Marriage used to describe the Jazz’s victory….

"Small cars are big business. Of the 2.3 million new cars sold in the UK last year, more than 20 per cent were superminis. We’ll save you from doing the maths – think around half a million sales.

"No wonder manufacturers are falling over themselves to attract buyers with new metal. In the first four months of this year, five all-new hatchbacks were launched. But good though the Ford Fiesta, Volkswagen Polo, SEAT Ibiza and Citroen C3 are, they weren’t able to match our new champion.

"The Honda Jazz has rewritten the supermini rulebook. All the more impressive, considering Honda (unlike its experienced rivals) has never built a proper supermini before. But Ford, VW et al seem to have got stuck in a supermini rut, allowing fresh-thinking Honda to steal a march.

"Innovation is the key to the Jazz’s success – the Japanese newcomer is a packaging masterpiece. The fuel tank sits under the front seats, allowing the rear floor to be positioned 220 mm lower, thus creating a much taller cabin. Using this space is made easy thanks to a unique rear seat arrangement that allows the base to fold up, or the entire set-up to fold flush with the boot floor. Like all the best designs it’s simple, logical and user-friendly.

"The cute Jazz is easily the most spacious car in the class, almost as tactile and well built as the Polo and attractively styled throughout. It’s also exceptionally neat and easy to drive, with crisp, light controls.

"It even has an amazingly clean and efficient engine – though we’d expect no less from an engine-builder with Honda’s reputation. The 1.4-litre 82 bhp unit returns a diesel-like 48.7 mpg, yet performs admirably, too.

"What seals the deal for the Jazz is Honda’s reputation for reliability and engineering, as well as the fine value for money it offers. Plus it doesn’t take itself too seriously – there’s an element of character and fun to the Jazz that’s all too rare amongst other contenders in this class."

Finally, it has to be said that winning accolades isn’t new for the Honda Jazz. The multi-talented supermini has already won two Japanese Car of the Year Awards and gone on to become the best selling car of all in the Orient.