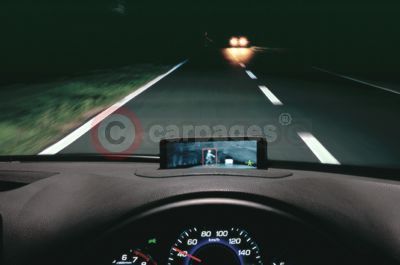 The new system uses "far infrared" cameras to detect pedestrians in or approaching the vehicle’s path and provides the driver with visual and audio cautions to help prevent accidents involving pedestrians. The Intelligent Night Vision System uses images obtained from two far infrared cameras positioned in the lower section of the front bumper to detect the position and movement of infrared heat-emitting objects and determine whether they are in or approaching the vehicle’s path.

Based on size and shape, the system also determines if the detected object is a pedestrian. In addition to the conventional night vision function of giving the driver an enhanced view of the road ahead, the system is the world’s first to provide cautions that inform the driver of the presence of pedestrians who are on the road or about to cross the vehicle’s path.

To address this issue Honda, which places a high priority on the development of new pedestrian safety technologies, developed the Intelligent Night Vision System. Honda is committed to the further development of technologies designed to help prevent accidents involving pedestrians.

In its ongoing efforts to reach a better understanding of the kinematics of pedestrian accidents and to develop technologies to protect pedestrians, Honda developed the world’s first pedestrian dummy, POLAR I, in 1988. This was followed by POLAR II in 2000, which features an even more human-like structure and more points of measurement. The company is also at the forefront of vehicle pedestrian protection technology, generally acknowledged as being the first company to manufacture cars specifically designed to minimise pedestrian injuries. More recently the company has developed the world’s first pop-up bonnet with the same aim.

Honda (UK) cannot confirm when and if "Intelligent Night Vision" will be available in Britain, however pedestrian safety technologies pioneered in the HR-V and Civic now feature on all new Hondas for Europe.