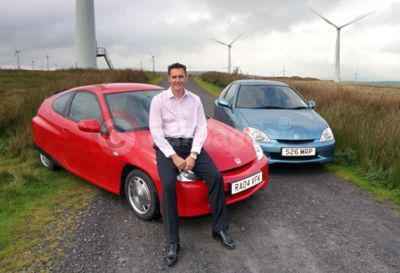 Call off the search! After a campaign to find the driver of Britain’s highest mileage Honda Insight or Civic IMA, the company has found its man.

Fittingly the most travelled driver of the UK’s cleanest petrol electric car works in the Wind Farm Development Industry as a Development Director for GAMESA energy UK.

Matt Partridge, 32 from Nailsworth, Gloucestershire contacted Honda after reading about the campaign.

"I knew there could not be many 100,000 mile Honda Insights around, so I kept my fingers crossed and called the company," said Matt. "I can understand why Honda has done this, because in 103,000 miles the IMA technology has been faultless - the car is still running its original battery and I’ve never had a breakdown."

Because of the Insight’s "green" credentials, Mr Partridge will have prevented more than 13 tonnes of carbon dioxide from entering the atmosphere over the car’s 100,000 miles, compared with that produced by a standard 1.6 litre hatchback. That’s equal to 17 times the car’s weight. But he’s not only helped save the environment - he’s saved more than £4500 in petrol costs!

Honda had offered a Civic IMA as a free replacement for the 100,000 mile motor, but in a surprise twist, Mr Partridge opted for another Insight. "It was a generous offer from the company, but I love the little coupe so much that I just wanted another one," he said.

Honda is currently the only maker of two petrol electric cars on sale in the UK - the Insight and more recently the Civic IMA. Both feature Honda’s Integrated Motor Assist (IMA) system which uses a powerful electric motor to boost the power and efficiency of a small petrol engine, capturing energy normally wasted as heat in the brakes and re-using it to save fuel when accelerating.

Since 2000, the company has sold 75,000 petrol electric cars worldwide with Britain one of the most important markets. Right now Honda is selling more Civic IMAs in Britain than it is in Japan, with the model being the top selling petrol electric (hybrid) model here last year.

Honda Insight Images may not be UK specification cars. Colours and exterior and/or interior elements may differ from actual models.