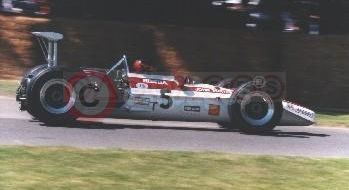 A sextet of Grand Prix Hondas with the champions who raced them fits perfectly with the theme "On the Limit - A History of Heroes". It's the topic of this year's tenth anniversary Goodwood Festival of Speed, held from 12-14 July 2002.

The 2002 event marks the return to Goodwood of Honda's historic GP cars, with the company bringing two of the V12 racers from the 60's 3 litre era and a singleton Lotus Honda 100T from the turbo period of the late 80s.

The three cars are joined by a trio of GP motorcycles - represented by the 125, 250 and 350cc machines, all from the 60s. These multi-cylinder four strokes mark a period in time when Honda was completely dominant in bike GP racing, just as it is today in the four stroke MotoGP class.

The display of victorious machinery arrives in the UK directly from The Honda Collection Hall in Japan. Designed to be a living history, The Collection Hall is a state-of-the-art three-storey museum situated in Motegi dedicated to the company's rich history of innovation, racing passion and engineering excellence.

This year is Honda's fifth at Goodwood, the event having become an annual pilgrimage for the Collection Hall team from Japan. The team participates because of the event's high quality and profile - and because of Honda's special relationship with the UK.

The Festival of Speed has been acclaimed as the "greatest show on earth" and is now the world's biggest historic motor racing event. Described as the 'garden party of the Gods', the Festival brings together cars, drivers, bikes and riders from every corner of the globe. Details of the Honda runners and riders at this year's event appear below..

Honda's second car built to the 1966 3 litre Formula One regulations, the alloy monocoque and tubular frame RA300 featured a 90 deg water-cooled V12 engine. Fitted with mechanical fuel injection, the quad cam 48-valve unit had an output of more than 420 horsepower at 11,500 rpm.

It weighed in at 590 kg and was "built like the Forth bridge" according to John Surtees, its driver! A heavily revised much lighter version of this car known as the "Hondola" (Honda engine, Lola chassis) won the 1967 Italian GP at Monza with the 1964 World Champion at the wheel.

Very much an upgraded version of the previous year's car, the RA301 featured a slimmer all alloy monocoque and aerodynamic aids for the first time. Power output of the revised V12 engine had crept to over 450 horsepower, while the car's weight was cut to 530 kg. Despite leading two Grands Prix, successes were confined to a second place in the French, and third in the American GPs of the 1968 season, both with Surtees driving.

Powered by the Honda 1.5 litre V6 twin turbo RA168E engine, the Lotus Honda 100T was designed to meet the new turbo boost limit of 2.5 bars and fuel capacity limit of 150 litres of the 1988 season - the final year of the F1 turbo era. It was driven by Nelson Piquet and Satoru Nakajima (who also drives the car at Goodwood), Senna having defected to McLaren that year. And that was Lotus's biggest problem - for McLaren won 15 of the 16 F1 races in 1998 with that same Honda engine!

In the hands of Piquet, the 100T scored a trio of third places - at the Brazilian, San Marino and British GPs.

World's first 5-cylinder 125cc road racer, the RC149 emerged winner of both Manufacturers' and Riders' Championships during 1966. The tiny air-cooled four-stroke produced no less than 34 PS at a staggering 20,500 rpm.

With a formidable line up which included Tom Phillis, Jim Redman, Mike Hailwood, Bob McIntyre and Kunimitu Takahashi, who became the first Japanese rider to win a GP on the machine, the RC162 was unstoppable in the1961 season. It won 10 of the 11 GPs that year, and took both the Manufacturers' and Riders' titles (with Hailwood) that year.

Powered by an across-the-frame parallel six air-cooled four stroke and equipped with 7-speed transmission, the RC166 had formidable performance. The engine screamed to 18,000 rpm, where it developed no less than 60 horsepower. Ridden by Mike Hailwood, the RC166 captured both Manufacturers' and Riders' Titles of the 1966 Series - winning all 10 races.

Winner of seven out of eight races in the 1967 World Championship Series, the RC174 was very much a scaled up version of the RC166. It took part in the 350cc class featuring a 297cc DOHC parallel six mounted across the frame - thus giving away 50ccs to its competitors! Despite this, power output was "over 65 horsepower" at 17,000 rpm - and the RC174 took both the Manufacturers' and Riders' championships of the 1967 season.

Winner of six World Championship crowns and 45 victories - all on Hondas - between 1961 and 1966, Jim Redman is generally considered to have been Honda's most successful rider during its formative years of international competition. He will be travelling from his home in South Africa to ride the RC174 made famous by Mike "the bike" Hailwood.

Northern Ireland rider Ralph Bryans progressed his career through 50, 250 and 350cc classes during the mid 60s, winning Grands Prix on Honda machines in all three categories - as well as a world championship in 1965 in the 50cc class.

At Goodwood, he will ride the all conquering RC149.

Rob is another former Honda factory rider dusting off his leathers to make a welcome appearance at the 2002 Festival of Speed. A winner of both 250 and 350cc Grands Prix for Honda in 1962 - as well as an Isle of Man TT victory in the 125cc nearly a decade later - the British rider will be sharing the four cylinder RS162 with Stuart Graham.

The only winner of car and bike Tourist Trophy races, Stuart Graham nowadays runs a successful Honda car dealership in Nantwich, Cheshire. At Goodwood, Graham will be sampling the delights of Honda power against which he raced in the 60s!

To this day the only man to have won World titles on two wheels and four, John Surtees' relationship with Honda began when he drove for the car team in the 1967 GP season. Following his victory in that year's Italian GP, he remains one of only two men to have won victories for Honda with engines and chassis designed by the company.

Surtees will be re-united with RA300 at this year's Festival of Speed.

Nakajima is the most successful Japanese Grand Prix driver of all time, in terms of World Championship points scored. Spanning a four year career in Formula One, he faced the unequal task of successively partnering Senna and Piquet in the Camel Lotus Team, before moving to Tyrrell. Despite this, he finished 11th in the 1987 Championship, with a creditable 4th (behind Senna!) in the British GP.

At Goodwood, the Japanese is reunited with the Lotus Honda R100T with which he competed in the 1988 season.

Former CART Champion, Indy 500 winner - as well as one time Formula Ford, Formula 3 and F1 competitor - America Danny Sullivan is a long time supporter of the Goodwood Festival of Speed. Sullivan is from a more modern era, having enjoyed the peak of his career during the 80s.

Like Surtees, Sullivan will be making full use of Honda V12 power up the Goodwood Hill driving the RA301.