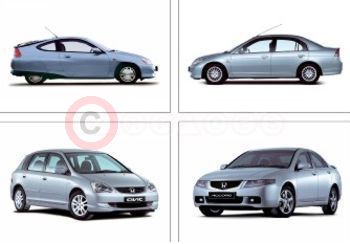 With mounting concern about rising fuel prices, motorists might be forgiven for panic. Certainly they are becoming more concerned with miles per gallon than miles per hour – and for many, it’s time to compromise.

But help could be close to hand. Among Honda’s current line up are four miserly cars that are anything but miserable. The "fab four" show that it’s possible to travel in style and have fun, at the same time achieving a 50 mile per gallon average. These cars allow drivers to travel cheaper and further on each tankful to the benefit of both themselves and environment (but not the government, whose revenue depends heavily on tax raised by fuel duty).

As the world’s most prolific engine manufacturer, Honda knows more than anyone about how to build efficient power units. Whether it be petrol, diesel or Honda’s unique IMA (Integrated Motor Assist) petrol electric system, each one is optimised to achieve the best possible performance economy balance.

But there’s more to Honda’s fuel sippers than state-of-the-art engines. Low weight bodies incorporating "slippery" aerodynamics – and, in some cases, tyres with low rolling resistance all play a part too.

Here then, we present Honda’s quartet of clever cars for averting a fuel crisis…

Launched in September 2000 as Honda’s "Coupe for the 21st Century", the Insight blends a mass of new technologies to achieve the world’s lowest fuel consumption for a mass-produced petrol engine car. More than just a technological showcase, the Insight is engineered for real-world motoring: it is designed to be practical to own, affordable to run and above all, fun to drive. Honda's Integrated Motor Assist (IMA™) hybrid system features a high efficiency petrol engine and electric motor working in unison.

Four years from its launch, the Insight remains the car with the best fuel consumption and lowest carbon dioxide emissions on the UK market. No other car comes close.

Based on the Civic 4 door saloon, the Civic IMA uses a 1.3 litre petrol engine coupled with a thin and lightweight electric motor for enhanced fuel economy and added power when accelerating. The electric motor acts as a generator during deceleration and braking, automatically recharging the car’s battery pack. The end result is a highly economical, roomy and comfortable 5-passenger saloon that retains all of the Civic family’s class-leading safety, performance, refined handling characteristics, reliability and legendary build quality.

And no, it doesn’t need to be plugged in at night – it’s self charging!

Installed in the highly popular Swindon-built three and five door hatchbacks, a 1.7-litre 100 PS turbodiesel offers smooth, refined power delivery matched to outstanding fuel economy. When performance and economy are considered as a whole, the Civic diesels go straight to the top of the class. They offer performance roughly equivalent to rivals’ 2.0 litre diesel models, while preserving most of the economy advantage associated with the smaller 1.7 litre engine.

Widely praised since its launch earlier this year for its all-round ability in both saloon and Tourer forms, the Honda Accord range now receives the company’s brand new diesel engine to complement the 2.0 and 2.4 litre DOHC i-VTEC petrol engines and open up potential Accord ownership to a whole new customer segment.

The new 2.2 i-CTDi engine is the first diesel unit to be fully designed and developed in-house by Honda and it doesn’t disappoint. Measured across a range of criteria, it delivers a blend of performance, refinement and efficiency to compete with the very best in the market.

All competitor data sourced from JATO