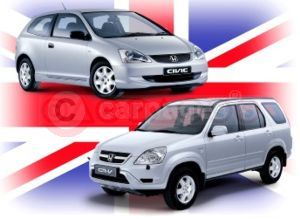 Few would guess that it’s the Honda Civic which reigns supreme. This year British car buyers will take delivery of some 35,000 of the Swindon-built hatches, ranking it well above compatriots like the Nissan Almera, Rover 45/MG ZS, Toyota Corolla and Vauxhall Astra, only a small number of which are now built in Britain.

Even ignoring the country of origin, the Civic fares well. The Type-R has become the most prolific genuine high performance hot hatch of all, while the mainstream Civic 3 door is runner up only to the (German and Spanish-built) Ford Focus.

In the 5-door category, the Civic emerges 6th, ahead of the (French-built) Renault Megane and (Spanish-built) SEAT Leon as well as ahead of all other Japanese brands.

… and CR-V also leads the way

Civic isn’t the only British Honda success story this year. The Swindon-built CR-V has been dominating the UK’s petrol SUV sector with an 11% year-on-year sales rise and is the best selling 5dr petrol in class – though it is just outsold by combined petrol and diesel sales of the Land Rover Freelander.

In production terms, the CR-V is now built in double the numbers of the Freelander and is now the fifth largest produced car in the country. Swindon is on track to build some 120,000 CR-Vs this year.