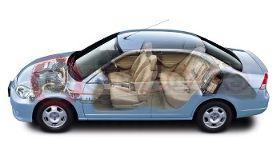 The new Honda Civic IMA making its British motorshow debut at the NEC will be the first established mainstream vehicle equipped with Honda’s Integrated Motor Assist (IMA) petrol-electric hybrid system to hit the market when it goes on sale in 2003.

In Britain, the Civic IMA will be sold as an integrated part of the Civic range. It will be sold with a high level of equipment and refinement, and will offer increased operating efficiency and reduced personal tax liability for company car drivers without any disadvantages in terms of service or maintenance requirements when compared with other petrol or diesel C-sector cars.

Based on the Civic 4 door saloon, the Civic IMA uses a 1.3 litre i-DSI petrol engine coupled with a thin and lightweight electric motor for enhanced fuel economy and added power when accelerating. The electric motor acts as a generator during deceleration and braking, automatically recharging the car’s battery pack. The end result is a highly economical, roomy and comfortable 5-passenger saloon that retains all of the Civic family’s class-leading safety, performance, refined handling characteristics, reliability and legendary build quality. The expected EU combined fuel consumption figure is approximately 57 mpg – which equates with a carbon dioxide emission figure of around 120 g/km. Furthermore the Civic IMA will meet the Euro IV emission standard.

Further contributing to economy are aerodynamic enhancements that include a refined front bumper, a boot spoiler and under-body covers.

The IMA hybrid power unit of Honda’s Insight captured the International Engine of the Year award in 2000 for its innovative combination of an efficient petrol engine and an electric motor positioned between engine and transmission to provide a simple solution to the seemingly incompatible task of combining both efficiency and performance.

The Second Generation IMA system launched in the 2003 Civic 4 door – already on sale in both Japan and the USA – ushers in a new era of high efficiency transportation, applying proven IMA technology to a mass-produced vehicle on an existing platform. It builds on the Insight’s technological concepts, but it does so using a significantly different mechanical system packaged in a conventional body design.

The Principles Of IMA

Honda’s patented IMA concept is grounded in simplicity - use a highly efficient gasoline engine and supplement the performance with an electric motor. Also referred to as a ‘hybrid’ system because it uses two power sources, IMA allows the use of a smaller gasoline engine without any significant loss in performance. The system is especially effective when you consider that acceleration requires a significant amount of power and energy (requiring a larger displacement engine at the expense of overall fuel economy), but the extra displacement is not necessary while driving at a constant speed on a level road (where vehicles spend the majority of their time).

The electric motor positioned between the engine and transmission assists the engine when accelerating and recaptures energy when braking or decelerating (regenerative braking), allowing it to operate independently without the need for an outside power source. When the Civic Hybrid is coasting or its brakes are applied when the engine is in gear, its electric-assist motor becomes a generator, converting forward momentum (kinetic energy) into electrical energy, instead of wasting it as heat during conventional braking. Energy is stored in the system's Nickel Metal Hydride (NiMH) battery pack located behind the rear seat in the boot. If the charge state of the IMA battery is low, the motor generator will also recharge while the Civic Hybrid is cruising.