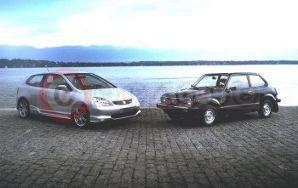 Seven Steps To Heaven; From Humble Hatch To Global Superplayer

It’s a time of celebration for Honda. July 2002 marks the 30th anniversary of the Honda Civic. And co-incidentally the model also notches up its two millionth sale in Europe, exactly one quarter of which have been supplied by Honda’s European Car Plant, at Swindon.

Production of the first Civic, a small 1200cc front-wheel drive hatchback began exactly three decades ago, at the Suzuka factory in Japan. Since then, the model has evolved through seven generations with body styles encompassing 3 and 5 door hatchbacks, saloons, estates, coupes, open top and even 4WD sport utility variants.

The Civic has seen the introduction of a number of Honda’s technical innovations including the CVCC engine (1973), the VTEC engine (1989), Real Time 4WD (Civic Shuttle, 1984), the electric powered folding roof (CRX, 1992) and CVT transmission (1996). More recently the model has made huge strides in the area of pedestrian safety and brought natural gas powered vehicles (Civic GX, 1997) and petrol/electric hybrid technology (Civic Hybrid, 2002) into volume production.

The Civic is now produced at several plants around the globe, sold in more than 100 countries and has achieved total sales of over 14 million.

Each Civic Generation Technologically Ahead Of Its Time

During the 30 year history of the model, each successive generation has set new standards and it is no accident that it remains Honda's most successful model. It has also become synonymous with the success and efficiency of the brand as well as the breakthrough and elevation of Honda into the world's top 10 vehicle manufacturers.

The first Civic introduced in 1972 – a 2 door model with a transverse 1.2 litre aluminium engine and front-wheel drive – signalled a technological revolution: long before the Golf it came to characterise the archetypal compact vehicle.

The second generation saw the introduction of the first Civic 5 door hatchback in 1979. The 1.5 litre 4-cylinder engine producing 70 horsepower at 5,500 rpm, and matched to a 4-speed manual gearbox or 2 speed Hondamatic box, was a modified CVCC engine introduced in 1973 in order to conform to the Clean Air Act in the USA. In its ability to reduce harmful emissions this engine established a long-standing benchmark and helped establish Honda’s worldwide image as an innovative engine manufacturer.

Honda’s first Civic was powered by an all aluminium 54 hp 1.2 litre SOHC 4-cylinder engine. In Japan and the USA, the new car featured a low-pollutant CVCC engine, which until 1983 met the strict American exhaust gas standards without the use of a catalytic converter.

Worldwide the Civic caused a sensation with its design, technology and low fuel consumption – features that characterised all later models. By 1976 production had already reached the magical one million mark.

The second generation Civic saw external dimensions increased, while during the lifetime of the model, the manual gearbox was provided with five speeds and from 1981 the Hondamatic transmission with three speeds. By the end of 1982, three million Civics had been manufactured.

This is also the model upon which the Triumph Acclaim, built by Rover Group, was based – the Acclaim being a licence-built version of the 4 door Honda Ballade.

Introduction of the ‘Wonder Civic’ with its three bodystyles: the 3 door, the ‘Shuttle’ (a predecessor of today's MPVs) and the CRX.

The fresh, sharp lines of this new ‘Europeanised’ series represented a major change in direction of the Civic’s development and the 3 door Civic received the renowned ‘Car-Design-Award 1984’ from the city of Turin and Piemont region.

A significant feature was the 12-valve light alloy engine fitted to all models. This improved combustion characteristics, reduced fuel consumption and provided excellent torque. Engine choice ranged from 1.2 litre (55 horsepower) and 1.3 litre (71 horsepower) to 1.5 litre (85 or 100 horsepower). In 1985 the engine series was largely switched to fuel injection in conjunction with catalytic converters. The first cat-engine, the 1.5 litre capacity unit, produced 90 horsepower at 5800 rpm.

In particular the CRX became a favourite with the young and young at heart – a compact sports coupé whose powerful 100 horsepower 1.5 litre engine delivered 0 to 62 mph acceleration in under 10 seconds and went on to a top speed of 124 mph. In 1985 Honda developed the model further, installing a 1.6 litre DOHC four valve engine, capable of 130 horsepower at 6,500 rpm.

Another innovation well ahead of its time was the Civic Shuttle; with its spacious interior and short wheel-base, it could legitimately be described as a forerunner of modern MPVs and certainly a forerunner of the current Stream. From 1985 the Shuttle was equipped with Real Time 4WD, able to engage all-wheel drive automatically only when required.

This generation saw the introduction of four-valve-per-cylinder engines across all models. For the first time the double wishbone suspension system used on the Accord and Prelude was incorporated front and rear to guarantee excellent stability and handling.

From 1990 the 3 door model was available with a 125 horsepower 1.6 litre SOHC-VTEC engine, the first engine in the world which allowed variable valve timing and lift. Installed in the CRX ESi (SOHC-VTEC with 125 horsepower) and VTi (DOHC-VTEC with 150 horsepower, Honda became the first manufacturer of a high performance engine whose flexibility made it just as capable in town traffic as it was on the open road. In the VTi version, the CRX was a pure performance variant and could reach a top speed of 138 mph.

The hitherto linear design of the Civic gave way to a more tapering design, and the reduced glass area – in spite of a greater wheelbase and length – provided a more compact appearance. From a safety point of view the fifth generation was responsible for the introduction of ABS and the Euro-Airbag (SRS 2). Engines ranged from 75 to 160 horsepower for 3 door models and from 90 to 160 horsepower for the saloon. With this generation, two new VTEC engines – a SOHC-VTEC and a VTEC-E engine – were introduced. During the ADAC's ‘Eco Tour of Europe’, a Civic 3 door with the VTEC economy engine achieved a sensational and hitherto unsurpassed consumption of 57 mpg (under 5 litres /100 km).

The hatch of the 3 door was horizontally divided which both enhanced its appearance and helped it to best seller status.

In February 1993 the Civic range was supplemented by the very attractive American-built Coupe, while two years later the Swindon-built 5 door model appeared on the scene. This was destined to be the biggest selling Civic of all in the European market.

The 3 door model increased in size to 4.19 m and now featured clear glass headlights as well as a striking roof line. Engine outputs were also increased without a fuel consumption penalty. The Civic 1.6i ES featured an electronically controlled CVT-gearbox for the first time. In 1998 the Civic series was augmented by the introduction of the family-friendly ‘Aero deck’ estate, another Swindon built model.

The new Civic has fresh and innovative styling and a distinctive short nose. It is 50 mm higher than its predecessor. The steeply raked bonnet is particularly aerodynamically efficient, while the arching roof line delineates a large glass area ensuring excellent visibility.

Discreet Type-R logos, an attractive honeycomb grille, front and roof spoilers, side aprons and broad side rubbing strips differentiate the Civic Type-R externally from other 3 door Civics. With its 200 horsepower 2 litre engine, the Type-R is the most potent product in the history of the Civic. It epitomises Honda’s outstanding motor sport involvement which has netted six Formula 1 constructors’ titles and over 500 motor cycling victories in Grand Prix. This wolf in sheep's clothing behaves docilely in town traffic just like a ‘normal’ compact. However, on the open road, it transforms itself into a racing machine ‘par excellence’: application of the accelerator pedal can catapult the Type-R to 62 mph in just 6.8 seconds.