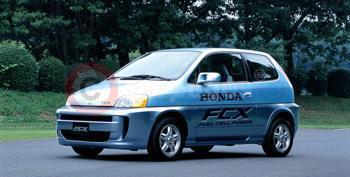 Honda this week announced the delivery of two Honda FCX hydrogen-powered fuel cell vehicles to the City of San Francisco, bringing to twelve the number of Honda fuel cell cars on the road in the United States and Japan.

The City of San Francisco will lease two Honda FCX vehicles for a period of one year with an option for a second year, adding to their fleet of more than 700 alternative fuel and advanced technology vehicles. San Francisco intends to create hydrogen-refueling infrastructure to support regular daily operation of the vehicles by city officials.

The FCX has a range of up to 170 miles and seating for four people, making it practical for a wide range of real-world applications. In 2003, the City of Los Angeles celebrated its one-year anniversary as the first Honda fuel cell customer with five fuel cell vehicles in every day fleet use.

In addition to the current FCX, Honda has developed its own FC stack with the ability to start in sub-zero temperatures, a major breakthrough for fuel cell technology. Recently, a successful cold-weather demonstration was conducted demonstrating the vehicle’s cold-weather performance capabilities and its ability to start in below freezing temperatures, a major hurdle in the drive to create a truly mass-marketable fuel cell vehicle. Honda will continue cold weather testing in Japan and the northeastern United States in its efforts to make widespread use of fuel cell vehicles a reality.

Honda undertook fuel cell research in 1989 and has been road testing vehicles in the United States since 1999. Honda has also been a member of the California Fuel Cell Partnership based in Sacramento, Calif., since 1999.

Honda FCX Images may not be UK specification cars. Colours and exterior and/or interior elements may differ from actual models.