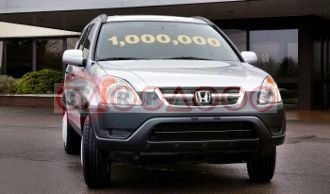 Production accelerates from zero to a million in a decade

A million cars is a lot of metal. Line them up nose-to-tail and you’d have a line of traffic which would stretch for 2,500 miles which would extend round most of Britain’s coastal roads. Fortunately that would not be possible because about two thirds of Honda’s UK car production has already been exported….

With its 4,300 strong workforce, Honda’s Swindon car plant will build its one millionth car tomorrow, 6 March. It will be a silver CR-V destined for North America, one of approximately 114,000 of the model which the plant will build this year together with 76,000 of the famous Civic range.

While CR-V is a relative newcomer, the Civic has been the mainstay of the plant over the past eight years. Cumulative production of the model at Swindon through sixth and seventh generation versions now exceeds half a million. Two generations of Accord have also been built at Swindon (5th and 6th series), with almost 327,000 built between 1992 and 2002. Production of this model ended last year to free up capacity to build more CR-V models: to date the plant has built almost 100,000 of the popular sports utility.

Additionally the plant has built 1.5 million engines, including almost all of the petrol engines fitted to the Civics, Accords and CR-Vs, plus supplying engines to the Rover Group between 1989 and 1999. The engines produced at Swindon have, from the very beginning of production back in 1989 been renowned for their performance and reliability – put simply, their outstanding quality.

Since the completion of the No 2 plant in September 2001, the Wiltshire plant has become a vital piece of Honda’s Global Supply Network. The facility uses some of the world's most advanced production systems distilled from manufacturing know-how in Japan, North America and the UK. It employs Honda’s New Manufacturing System (NMS) which replaces model specific equipment and production processes with those which are universal. This allows rapid model changes enabling Honda to quickly and economically introduce new variants in response to the ever changing needs of today’s customer.

In January 2002 Swindon became a joint supplier of the new CR-V to USA, and is the sole supplier of this vehicle to Europe. It is also the only Honda plant globally that builds the Civic 3-door, a model that is exported as far afield as Japan and North America; it also builds Civic 5-door models for 18 markets across Europe, the Middle East and Africa.

"Thanks to the tremendous efforts of our Associates, Honda of the UK Manufacturing (HUM) Ltd last year achieved its biggest year of growth since car production began at the plant in 1992," said Minoru Harada, President of Honda Motor Europe. "More than one in 10 cars built in Britain is now a Honda – and last year’s 177,000 record total means that we are the country’s fourth largest car manufacturer. Honda is also now one of the largest vehicle exporters, with almost 109,000 cars shipped abroad last year," he added.

"But we are not concerned just with numbers," added Mr Harada. "I am proud to say that the cars built at Swindon are recognised as the best in their class wherever they are sold – and their quality is a match for that of our other models built anywhere in the world."

Swindon remains Honda’s only European car manufacturing facility and the twin car plants have a combined capacity of 250,000 units per annum – to fulfil more than 6% of the company’s global needs. Honda plans to build approximately 190,000 units during the current calendar year.