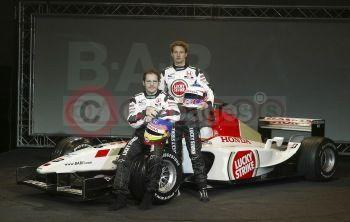 Lucky Strike B· A· R Honda marked the beginning of their 5th season in Formula One today (15 Jan) with the first test of their 2003 challenger in Barcelona, Spain. The all-new B· A· R Honda 005 is the result of a huge effort made by the team over the past year to dramatically improve engineering standards and to lift the performance of the team to a much higher level than previously achieved.

Getting his first taste of the car in Barcelona today is British young gun Jenson Button, who joins the team alongside Former World Champion Jacques Villeneuve to create what is undoubtedly one of the most exciting driver line-ups in Formula One today. At only 22, with three seasons in Formula One behind him, Jenson has put his faith in B· A· R in the belief that the team will provide him with a winning car in the long-term.

Compared to last year’s car, the new B· A· R Honda 005 is significantly smaller, lighter, has a lower centre of gravity and is more aerodynamically efficient than its predecessor.

2003 also begins a new chapter in B· A· R’s relationship with Honda, which will see the team benefit from exclusive engine supply. The new RA003e V10 engine is lighter, smaller and with a lower mass promises to provide more power as well as an improved torque curve. Honda will continue to work closely with the team in the area of chassis development.

Bridgestone continue with the team as official tyre supplier for the fifth consecutive year. The new technical regulations imposed over the winter have meant that each team will be allowed tyres specifically designed for their cars, so pre-season testing will see B· A· R and Bridgestone working very closely to ensure that they have the best possible package for the new season.