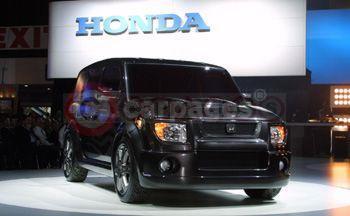 The Swindon plant supplies the USA with the CR-V sports utility vehicle and Civic Si – the US’s equivalent of the Type-R in Europe.

Sales of the CR-V were up 24% in 2002 to 146,256 units, said Tom Elliott, executive vice president of America Honda Motor, speaking at the North American International Motor Show in Detroit.

"Extra capacity at our UK plant has allowed that growth and the CR-V is now the best-selling entry-level SUV in the States."

The success of the CR-V and the Civic helped Honda achieve sales of more than 1.18 million vehicles in 2002. "Our target for 2003 is 1.35 million – a tenth straight year of record sales," said Mr Elliott.

Biggest increase came from sales of what Americans call light trucks or sports utilities – vehicles like the CR-V. "Ten years ago we didn’t sell any light trucks," said Mr Elliott. "Last year we sold over 400,000."

The success of the Element produced the panel-sided Studio E concept, unveiled at the show on Monday. It is built around the needs and lifestyle of a club DJ, transforming the outdoors-minded Element into the ultimate mobile entertainment platform complete with onboard personal computer for mixing music and a 42-inch plasma screen display. There are 11 speakers producing 800 watts of sound.

There is a bench front seat and two rear seat pods that flip down from the sides.

The Studio E is powered by a 2.4 litre four-cylinder engine producing 190 bhp and with a six-speed manual transmission.

There are no plans to put the Studio E into production, said Mr Elliott. "But if there’s enough interest, who knows?"

*Honda’s new Accord, which has just gone on sale in Europe, has won the ultimate endorsement. It will be sold under the prestigious Acura badge in the USA where it will compete head on with BMW, Lexus and Audi. Annual sales for the Acura TSX, as it will be known, are forecast at 15,000 units. Total Acura sales in 2002 were just over 165,500.