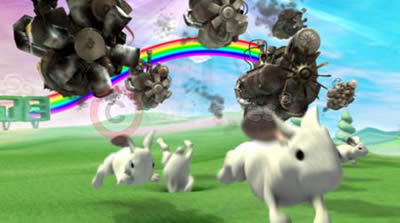 Honda’s latest TV ad has Garrison Keillor singing …. and explains why hate can sometimes be a positive emotion!

‘Hate something, change something’ is the theme for Honda’s first ever diesel engine TV commercial, which breaks this week (1 Oct). Entitled "Grrr", the 90 second commercial takes the viewer on a journey through an optimistic animated world of ‘positive hate’.

The film tells the story behind the creation of Honda’s first diesel in a unique way. Kenichi Nagahiro, the company’s chief engine designer and inventor of the celebrated VTEC engine, hated diesel engines, hated how noisy, smelly and dirty they were. When asked to design Honda’s first diesel he flatly refused - unless he was allowed to start completely from scratch. The result is one of the cleanest, most refined diesel engines on the market today, the 2.2 i-CTDi.

Cute bunnies, pretty flowers and rainbows - things typically associated with positive imagery - show their dislike of dirty, noisy, smelly diesel engines by destroying them in exchange for something better. They joyfully celebrate the arrival of Honda’s new diesel. And throughout the film Garrison Keillor sings a specially written folk song in which he asks the question ‘Can hate be good?’

Wieden + Kennedy, which produced the advertisement, were captivated by the idea of talking about Hate as something positive, a passionate force that could actually be turned to good use, and the slogan ‘Hate Something, Change Something’ was born.

"One of the biggest challenges was how to talk about hate in a really positive way that felt right for Honda," says Kim Papworth, Creative Director at Wieden + Kennedy, London. "Writing a song and creating an animated world of positive hate was the natural next step."

The commercial breaks as a 90" in cinemas from 24 September and launches on TV from 1 October as a 90" and 60". The campaign will be supported by press, radio, and interactive TV, as well as extensive content on www.honda.co.uk.