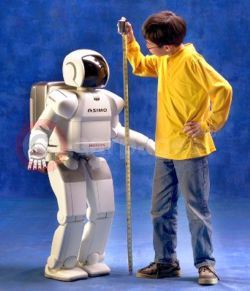 Honda’s ASMIO humanoid robot which can move like, interact with and be of assistance to humans is to make its first UK appearance at London’s Science Museum from February 16-22.

ASIMO’s appearance in London, where he will make four performances a day for the duration of the event, marks the start of a programme of public demonstrations across Europe over the next year to show how Honda is tackling one of the great technological challenges of the age. The tour will include Honda’s major facilities in Europe as well as scientific and robotics events across the continent.

ASIMO – one of the world’s most advanced bipedal robots

ASIMO (standing for Advanced Step in Innovative MObility) is regarded by many as one of the most advanced bipedal robots in the world.

In terms of ASIMO’s movement, Honda has studied and used as its model the complex co-ordinated movements of the human body. ASIMO’s proportions and joint positions resemble those of a human being and, in many respects, it possesses a range of movement comparable to that of humans.

Utilising new advanced motion technology developed by Honda, ASIMO not only walks forwards and backwards but also turns sideways, climbs up and down stairs, and turns corners. As such, ASIMO is the closest robot yet to replicating the natural walking motion of humans.

Central to this is the application of Honda’s intelligent walking technology, which allows ASIMO to walk flexibly in real time. It does this by enabling the robot to make predictions and adjust its motion accordingly. For example just as a human being when going round a corner will lean into it to adjust their centre of gravity toward the inside, so ASIMO also predicts its next steps and adjusts its centre of gravity accordingly. This ability to predict its next movement in real time also allows ASIMO to walk continuously. It doesn’t have to stop first, turn and then walk round a corner, instead it accomplishes this in one uninterrupted fluid motion.