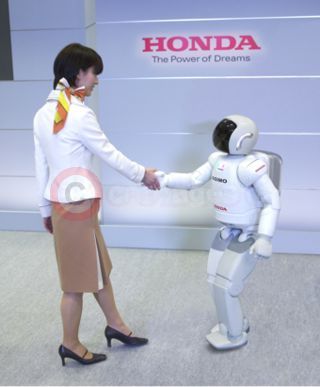 Honda Motor Co Ltd. This week announced the development of new technologies for the next-generation ASIMO humanoid robot, targeting a new level of mobility that will better enable ASIMO to function and interact with people by quickly processing information and acting more nimbly in real-world environments.

The combination of newly developed high-response hardware and the new Posture Control technology enables ASIMO to proactively bend or twist its torso to maintain its balance and prevent the problems of foot slippage and spinning in the air, which accompany movement at higher speeds. ASIMO is now capable of running at a speed of 3km/hour. In addition, walking speed has been increased from the previous 1.6 km/hour to 2.5 km/hour.

By detecting people’s movements through visual sensors in its head and force (kinesthetic) sensors which have been newly added to its wrists, ASIMO can now move in sync with people allowing it to give or receive an object, shake hands in concert with a person’s movement and step forward or backward in response to the direction its hand is pulled or pushed.

By continuing to advance these new technologies, Honda will pursue development of an ASIMO that will be useful to people.

In order to run, a robot has to be able to repeat the movements of pushing off the ground, swinging its legs forward, landing within a very short time cycle and without any delay, absorbing the instantaneous impact shock of landing. With a newly developed high-speed processing circuit, highly-responsive and high-power motor drive unit, in addition to light-weight and highly rigid leg structure, Honda realized highly accurate and responsive hardware with performance levels more than four times faster compared to that of the previous model.

Prevention of spinning and slipping

Due to reduced pressure between the bottom of the feet and floor, spinning and slipping are more likely to happen right before the foot leaves the floor and right after the foot lands on the floor.

When a human runs, the step cycle is 0.2 to 0.4 seconds depending on one’s speed, and the airborne time, when both feet are off the ground, varies between 0.05 to 0.1 seconds. The step cycle of ASIMO is 0.36 seconds with an airborne time of 0.05 seconds, which are equivalent to that of a person jogging.