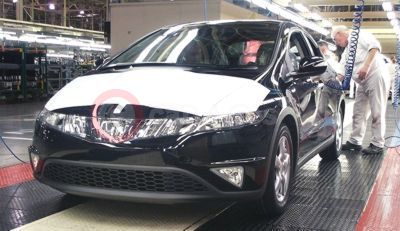 Swindon, Wiltshire has progressed through the years from being a famous railway town to now being a motor-town, the high-tech home of Honda of the UK Manufacturing, or HUM, as it is known.

Honda was founded in Japan in 1948 but now it has 120 manufacturing facilities in 29 countries around the world employing 131,600 ‘Associates’. 4,000 of them are employed at the South Marston facilities in Swindon, home to HUM, HRE (Honda Research Europe), EGE (Honda Engineering) and SDC (their logistics supply division).

Of the 4,000 employees on site, 3,500 are employed on the production lines. Around 80 Japanese engineers work at the factory, mainly in technology transfer roles. Of the total workforce just over 10 per cent are female. Honda also has a reserve of 400 temporary Associates who work as and when required to top up production rates or to provide sickness cover. Eighty per cent of Associates live within a 30-mile radius of Swindon.

Honda in conjunction with the local college also operates a Technical Training Programme for young recruits to the company. This programme for 14 salaried recruits being trained at any one time runs on a three-year cycle. The apprentices spend time at college and being trained directly on site at South Marston. Honda says the work attitude of potential new recruits is more important than the educational qualifications they leave school with. After training their progression through the company is down to attitude and real–life capabilities and showing us they really want to work here.

The South Marston sites covers 1.5million square metres or 370 acres and it was formerly an airfield and an aircraft production facility where, during World War II, Spitfire aircraft, amongst others, were produced by Vickers Aviation. Honda uses one of the airfield’s original two runways today as the on-site test track for their new CR-V medium sized 4x4s and Civic models built at this facility.

Honda bought the South Marston site in 1985 and initially set up a Pre-Delivery Inspection facility there for the cars which were built by Rover at Longbridge and Oxford but were badged as Hondas. Honda then opened an engine assembly facility on-site making power units for Honda and Rover cars.

Honda’s Swindon manufacturing site currently produces around 190,000 cars a year, 75 per cent of which are exported. Honda produce engines at the rate of 180,000 units a year at Swindon. In addition to petrol engines, they have just added production of their latest high tech diesel engine. Some engines produced at Swindon are exported to Turkey where Honda manufactures a four-door version of the Civic for the Eastern European and Chinese markets.

In theory, the current site could produce up to 250,000 cars annually if a four-shift system was adopted but HUM say there are currently no plans for this to happen. Currently HUM operates for 237 working days over a five day week with Associates working 37 hours per week. The average wage for the 4,000 Associates is just under £20,000 per annum. The facilities close completely for the annual summer holidays and at Christmas.

HUM is the UK’s fourth largest passenger car factory with 870 cars being manufactured daily. The site is divided up into three manufacturing units.

The third on-site facility is the Engine Plant that produces 1,000 units a day on a two shift system.

Latest production innovations on site include a new manufacturing system in Plant 2 where welding robots automatically go to the jigs holding the panels to be welded together rather than the conventional system where panels are transported to the assembly jigs. The robots automatically change their own welding heads depending on which panels they are joining This Plant uses 142 robots with just 74 Associates. This system, which speeds up production rates, will be adopted in Plant 1 in the future.

The Engine Plant now has its own high precision aluminium smelters where 25 tonnes of aluminium ingots are used daily to produce, by die-cast and injection moulding processes, cylinder heads and cylinder blocks. A cylinder block is produced every 110 seconds and two cylinder heads are produced in pairs every two minutes. This Plant has only recently started producing and machining cylinder heads for Honda’s award winning new diesel engine. It is expected that cylinder block production for this engine will also start this year. Up to now components for this advanced engine have been brought from Japan to Swindon for final assembly.

The Swindon Engine Plant has the only manufacturing facility in the UK where petrol and diesel engines are assembled on the same production lines. It produces 300 diesel and 380 petrol engines daily. At the end of the engine line there are three dynometers where around one engine in a thousand, depending on what manufacturing or specification changes have taken place in the production process, is run up to test performance and durability. These tests can run from one to 400 hours per engine covering up to 8,000 different operating cycles, from stop-start through to running at prolonged maximum speeds. At the end of the tests the engines are destroyed and not fitted to production vehicles. To re-cycle the energy generated during the tests each ‘dyno’ is linked to a generator which provides electricity to top up the power used by the South Marston facilities.

Production of the latest Civic range is the ninth new model to be produced by HUM in Swindon and in a full year 100,000 units, or 500 every working day, will roll off the Wiltshire production lines. Of these 27 per cent will be sold in the UK, 33 per cent will go to the USA, 39 per cent to Europe and 0.2 per cent to Japan, that being the Civic Type-R which will be built exclusively at Swindon.

All the vehicles are moved from the South Marston production facility by car transporter lorries either to UK dealers or to docks at Southampton, Portbury or Avonmouth, depending on which country they are to be exported to. Ninety five per cent of all cars produced at South Marston will have been transported from the site within 24 hours of their manufacture.

Mike Godfrey, senior manager and chief engineer environment and business administration, at HUM said, "We are always considering the possibility of moving cars off-site and parts on to the site by rail but the rail network is too expensive and currently it is focussed only on passenger travel." Ironic really, when Swindon has a heritage of being a railway town.

Currently HUM has 200 global suppliers of components and parts to meet their production needs at Swindon, these include 1.4-litre petrol engines from Honda in Japan. To bring this material on-site three lorries arrive every two minutes providing components two hours before they are used in a "just in time" delivery process.

To reduce traffic congestion caused by lorries entering and departing the South Marston site there is a direct link road to the main A419 Swindon bypass. The site also has its own internal road system linking all the production facilities and their Q-Point distribution centre.

This is a 15-year+ news article, from our Honda archive, which dates back to the year 2000.

If in doubt check with your local Honda dealer as car prices and technical data will have changed since 2006.