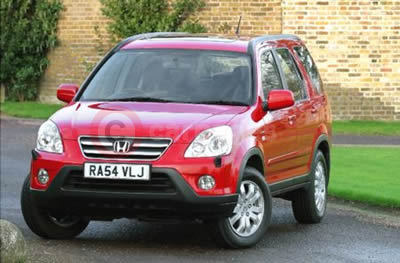 Honda saw their 2004 UK passenger vehicle sales increase by more than 11 per cent over 2003 to 91,241 units. This was just over a 1,000 units more than Nissan whose new car sales fell by almost 15 per cent. Toyota’s UK passenger car sales were 121,000, an increase of 3 per cent. All three Japanese companies have UK manufacturing bases.

Ken Keir, Senior Vice President of Honda Motor Europe and Managing Director Honda UK, puts this success down to the fact that they have always operated a natural growth policy, never forcing the market and distress selling the product.

He said, "The whole basis of our growth plan has come from our products being of high quality with impeccable reliability and maintaining really good residual values. There is always a demand from the British public to buy Honda vehicles. Seventy per cent of our customers are retail buyers".

Speaking at this week’s Press introduction of the revised Honda CR-V compact recreational vehicle, new i-CTDi diesel models go on sale in March, Kier said, "The CR-V illustrates the fact that Honda vehicles are among the slowest depreciating cars in the market. On average the petrol CR-Vs have retained 71 per cent of their retail price after three years and we expect the new diesel models to be even better. There is a real shortage of used vehicles and the CR-V range has never met the used car demand - you rarely used ones for sale".

Global sales of the CR-V have now topped the two million mark and annual sales exceed 250,000 units of which 40,000 are in Europe. In Britain 13,000 CR-V vehicles were sold in 2004 and this year Honda expect that figure to increase to 25,000 with the introduction of the new 2.2-litre diesel variants. However as the petrol versions have the option of an automatic transmission and the new diesel models do not, Honda say that 57 per cent of CR-V sales will be petrol models. Seventy per cent of CR-V diesel sales will come from conquest customers say Honda.

Honda also say 60 per cent of SUV vehicles are diesel powered in the UK, more in Europe, and just over 50 per cent, petrol and diesel models, have manual transmissions.

Currently the average age of CR-V owners is in the 45-50 group but with the addition of Honda’s award winning Euro IV all aluminium engine to the range they expect young professional buyers to be attracted to the vehicle lowering the age group. Younger customers say Honda tend to buy diesel vehicles as they are attracted by the savings in fuel and the lower taxation levels based on engine emissions. Older buyers, who traditionally do less mileage, tend to buy petrol models because of the price premium of diesel engines and fuel.

Although the CR-V models are built in seven countries, including their UK factory at Swindon which built 105,000 of these models in 2004, UK customers will be getting British built vehicles with 60-65 per cent European content. Currently the 2.2-litre diesel engine is built in Japan and shipped to the UK for fitting. By the end of 2005 the engine will also be assembled at the Swindon factory where 3,800 people are employed. The Swindon plant produces 193,000 vehicles annually, CR-V and Civic models.

Honda’s new diesel engine is also due to be added to the recently launched FR-V six-seat compact MPV in May this year and to the all new Civic range in 2006 where it will replace the current Isuzu sourced unit.