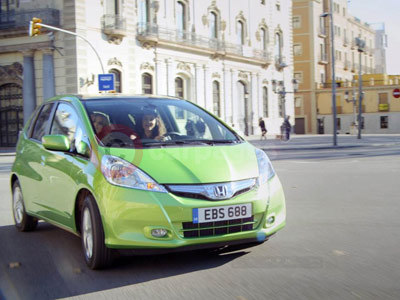 London based film and digital agency, Gaucho Productions, has produced the launch film for the new Honda Jazz Hybrid. Commissioned by Honda Motor Europe, the two minute film debuted at the international press launch of the Honda Jazz Hybrid, and will be used for marketing purposes across Europe, the Middle East and Africa.

The film follows a female charismatic urbanite named Elena, who works by day and parties by night. The film was shot over two days on location in Barcelona, using a handheld filming style to reflect Elena's energy and personality.

Gaucho creative director, Ben Hume-Paton directed the movie, and is also responsible for the Honda CR-Z and 2008 Honda Jazz launch films. "We wanted to show the urban appeal of the Jazz Hybrid and to reveal its green credentials in a way that didn't seem preachy or contrived," he says. "The spirit of the car is reflected in a fun loving, successful young woman. And although the film is set in Barcelona, it's relevant to any European metropolis."

The Gaucho team also produced a film called 'Hybrids Explained' for Honda which aims to describe how a hybrid car works in terms everyone can understand.

Alistair Weaver, managing director, Gaucho Productions: "We're thrilled to have produced another launch film for Honda. The Jazz Hybrid is a very sociable car and we wanted to have some fun with it in an urban environment. We had a great time shooting the film, and we're confident our enthusiasm's reflected in the final cut."

Christoph Rust, Manager - Product PR, Honda Motor Europe: "Gaucho are great at portraying our products exactly how we want them to be seen. I appreciate their skill at utilising modern technology to create clean and simple imagery, while withstanding the temptation to abuse it for excessive effect. Isn't it so much easier to shave yourself in a mirror than in a kaleidoscope? Alistair, Ben and the whole Gaucho crew assemble a strong team of experts for all aspects of the job. We have done a lot of work with Gaucho Productions and not only have we arrived at great results, we've always had fun along the way."