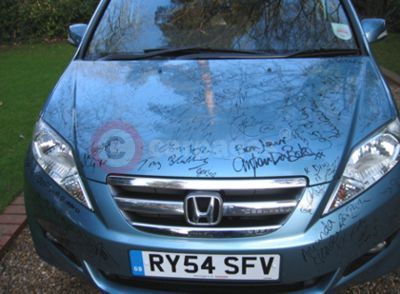 H&H, Europe’s largest specialist historic and collector’s car auction house, will see its youngest-ever lot go under the hammer at Stoneleigh Park on February 26th - a three-month old Honda FR-V. H&H isn’t making the full-time move into modern car sales, however; this particular ‘baby’ is bedecked with literally dozens of signatures from a host of celebrities and was the star prize on offer to those making donations to the 2004 BBC TV’s Children in Need charity appeal.

Many of the stars signed the car live on air during the televised appeal at the end of November 2004.

Powered by a 1.7-litre Vetec engine, it has a 21st-century spec. not generally seen on the classic cars which are more usually sold by H&H. The car boasts front, side and curtain airbags, a CD-player, ABS, ESB - and six, three-point seat belts.

And, as the lucky Children in Need supporter who won the car doesn’t drive, the FR-V has just 69 miles on the clock.

Further information on the sale can be found at www.classic-auctions.com

Honda FR-V Images may not be UK specification cars. Colours and exterior and/or interior elements may differ from actual models.