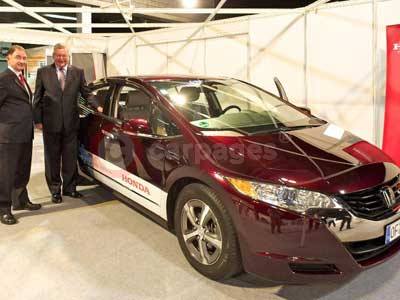 Fergus Ewing and Jim McDonald With The Honda FCX Clarity

The hydrogen powered Honda FCX Clarity has appeared at the World Hydrogen Technologies Conference in Glasgow, at the SECC attended by over 150 experts who discussed the future of clean energy which will see hydrogen play a key role.

The conference was opened by Scotland's Minister of Energy, Enterprise and Tourism, Fergus Ewing, who fully endorsed the drive the renewable energy and cleaner fuels.

The Honda FCX Clarity is an electric car with hydrogen generating electricity onboard via a 'fuel cell stack', which creates the power through the reaction between hydrogen and atmospheric oxygen, emitting only pure water vapour through the tailpipe.

The Honda FCX Clarity, which can be refueled from empty to full in less than four minutes, drives and handles just like a standard petrol car and provides a range of 288 miles and a top speed of over 100mph.

Since 2009, the Honda FCX Clarity has been in Europe demonstrating the potential of fuel cell electric technology to politicians and key decision makers.

Currently, the Honda FCX Clarity s already being leased in America and Japan where there is an emerging infrastructure to support hydrogen-powered cars. In order to introduce the car to the UK, a structure of similar refueling stations would be required. As such, Honda is cooperating with BOC and Forward Swindon to launch the UK's first public hydrogen refueling station, just off the M4 at Honda's Swindon car plant on 20th September 2011.

Honda FCX Images may not be UK specification cars. Colours and exterior and/or interior elements may differ from actual models.