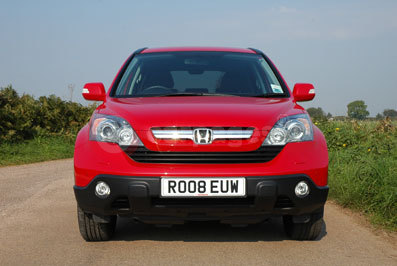 Launched in January 2007 the New Honda CR-V is the third generation of the very popular SUV to be built in the UK at Honda's Swindon plant.

The first generation CR-V was launched in Japan in 1995, with sales beginning in Europe in 1997, ending in 2001 - when the second generation was introduced, which had a life of five years.

Compared to the second generation model, the new Honda CR-V is around 100mm shorter (4530mm), which is mainly down to moving the spare wheel from the rear door to underneath the boot floor - a move which has helped with overall stability. It's 40mm wider (1820mm), while height is down by 30mm (1805mm including roof antenna). The wheelbase is reduced from 2630 to 2620mm, and front and rear tracks at 1565mm are 25 and 5mm wider, respectively.

There is a choice of either a petrol or diesel engine: The petrol engine is a new 2.0 litre i-VTEC unit producing around the same output as the predecessor, with better performance figures. The 2.0 litre petrol engine can be mated either to a new 5-speed automatic or a new 6-speed manual gearbox.

The 2.2 litre i-CTDi diesel engine is only available with a 6-speed manual gearbox, which is a modified unit used on the Honda Accord.

There is a choice of three trims SE / ES / EX, starting from £19,030 for the SE 2.0 Manual Petrol through to £25,130 for the top of the range diesel model, the EX 2.2 i-CTDi Manual. All cars are generously equipped with air conditioning, stability control and anti-lock brakes. Top of the range EX models come with amongst other luxuries, leather upholstery, DVD navigation, reversing camera, Bluetooth phone integration and electric driver's seat.