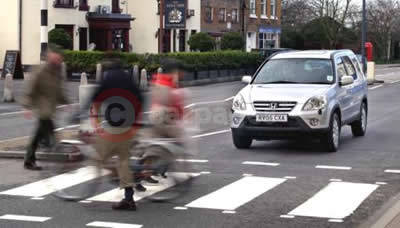 Next week, in time for the March sales surge, Honda will stir the 4x4 debate by launching a British-built model that’s compact, safe and oh-so-green.

There are some Sports Utilities which may be considered big, bad and ugly. But the Honda CR-V i-CTDi diesel, launched next month, will certainly not be one of them.

Not only does the latest CR-V have a smaller ‘footprint’ than most family cars, but it is also more economical than many - and with the lowest CO2 emissions rating of any vehicle in its class. It is also among the safest cars on the road, one of a handful of cars - and the only SUV - that combines a Euro NCAP four star occupant score with a three star pedestrian safety rating.

Without being immodest, we’d go so far as to claim that the Swindon-built CR-V i-CTDi is the greenest and most socially responsible SUV in the land.

Three versions of the new diesel will go on sale. They will be badged SE, Sport and Executive and will carry a £1400 premium over their 2.0 litre i-VTEC petrol engine equivalents. In addition to the class-leading specifications carried over from the petrol models, all of the diesels will be offered with 6-speed manual transmission. The diesels are visually identifiable by a tailgate spoiler (for improved aerodynamics) and discreet i-CTDi badging on the front wings and tailgate.

‘High quality, refined toughness’ is the theme used by Honda to promote the 2005 CR-V, and this is reaffirmed by the diesel. Building on the strength of the petrol CR-V, the fastest selling petrol SUV, it enters one of the fastest growing UK market segments - with diesel SUV sales up two thirds in the past two years, easily offsetting a one sixth drop in petrol sales.

"With this in mind, we anticipate an eventual petrol diesel split of 57 / 43, with annual CR-V sales now expected to total 21,500," says Honda (UK)’s Product Planning Manager, Richard Benton. "Such an achievement would place CR-V well ahead of competitors with, for example, Land Rover Freelander and Toyota RAV 4 achieving around 16,000 and 12,000 units respectively for combined petrol / diesel 5dr sales last year," he adds.

Honda’s advertising strategy has been to create awareness both for the Honda brand and for the diesel engine, driving demand for core models like the CR-V. In order to promote the new diesel, Honda has re-introduced its ‘Hate something, change something’ TV advertisement and launched a CR-V diesel print campaign to further boost sales.

The introduction of the CR-V diesel isn’t just good news for Honda dealers, it’s also good for UK car manufacturing. As a result of increased demand, the Swindon plant is geared up to produce some 60,000 CR-Vs for the whole of Europe this year - up from 30,000 last year.