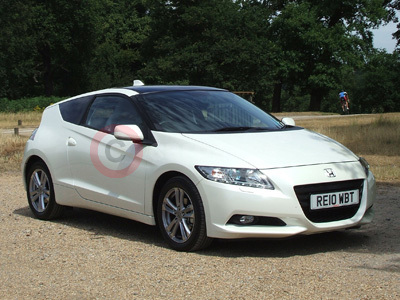 "We wanted to develop a car you would be proud of. We wanted the CR-Z to be a car you could show off to your friends. It had to have emotional styling to get people talking about it." These are the words of Norio Tomobe, Honda's Large Project Leader. And he, along with the Honda CR-Z designers and engineers, should be suitably proud of themselves.

Producing hybrid-powered cars is nothing new to Honda, and from the very start with the Honda Insight in 1999 the company has got it right. The Honda CR-Z follows in the footsteps of the superb Honda Civic IMA and Honda Insight and builds on their strengths.

In fact the Honda CR-Z looks somewhat similar to the Honda Insight - a scaled down version maybe, but with a lot more pizzazz. The concept is that you can have your cake and eat it, with a good mix of sportiness and economy motoring. Or, as the company puts it, "You don't have to abandon your passions to satisfy your conscience." Furthermore, it s all wrapped up in an exciting bodyshell, that sets it apart from the other hybrids on the market.

The Honda CR-Z's striking shape and styling is the result of many hours at the drawing board and in the wind tunnel; as there is little point in producing an eco-car that has all the aerodynamics of a house brick. Particular attention was paid to the rear end with its deep, rounded bumper below a split rear windscreen that extends well into the roofline and doubles as a tailgate. This is similar to the Insight and the Toyota Prius and also represents a nod to the old Honda CRX of the 80's. The darkened glazing is even more noticeable on the white car and in black; it simply appears mean and moody.

The long roofline provides a frame for the upper section of the rear window, while the strong C-pillars kick up from the integrated wheelarches, to form a frame for the triangular lights clusters and mark the point where the lower, vertical glazing meets the top section. At the front of the roof is a large sunroof but it is prevented from sliding open by the integrated aerial, which is fixed to the narrow bar of bodywork that joins the two cant rails.

The Honda CR-Z's front end is dominated by a deep front grille, which also houses the number-plate. It starts at the base of the front bumper and is flanked either side by the black fog-light housings. The straight upper edge of the grille draws the eye to the string of eight, daytime running lights set into the base of the sweeping headlight clusters. These running lights or DTRLs are only featured in the European version and the Honda CR-Z sold in the United States is quite different.

Above, the broad bonnet rises smoothly up to the windscreen. It looks innocuous enough but again, a great deal of thought and work has gone into the design, in order to shoehorn the 1.5-litre petrol engine and the IMA system under the bonnet without spoiling the lines but leaving enough room for deformation, should an impact occur.

Honda CR-Z Images may not be UK specification cars. Colours and exterior and/or interior elements may differ from actual models.