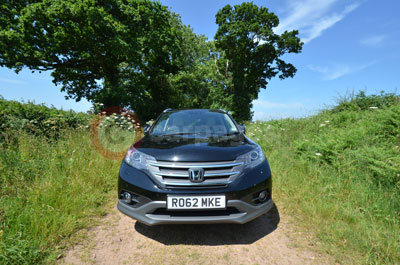 The fourth generation British built Honda-CRV was launched in the UK in September 2012, and follows on from a line of popular predecessors first introduced in 1995. The Mark III model this one replaces was introduced in 2007 and has done very well for Honda.

At the time of this test there were two engine options, a 2.0-litre i-VTEC petrol and a 2.2-litre i-DTEC diesel but they will shortly be joined by a 1.6-litre i-DTEC diesel which is only available as a two-wheel-drive model, a first with the CR-V. The petrol 2.0-litre has the option of front-wheel or four-wheel drive where the 2.2-litre diesel is only available as a four-wheel-drive model both can be specified with manual or automatic transmission.

We tested the top-of-the-range petrol Honda CR-V 2.0i-VTEC EX 4WD Manual with ADAS which at the time of testing was priced at £31,150 plus £500 for the Crystal Black Pearlescent paint finish.

The 2.0-litre i-VTEC is equipped with a 6-speed manual gearbox with the option of a 5-speed automatic transmission - you do have to rev the engine to get the maximum out it - which means you do have to work the gearbox if you want to make rapid progress.

When we tested the Mark III petrol 2.0-litre i-VTEC and diesel 2.2-litre i-DTEC models back to back in 2010� we found in a real world urban environment taking in the school run and shopping trips - the diesel had an advantage of about 8 mpg over the petrol model, but bearing in mind the purchase price, maintenance, and the added cost of diesel - it may make more sense to opt for the petrol model if you are doing low mileage and like more refinement. On the manual car there is stop/start technology which automatically switches the engine off at rest in traffic - powering it back on when pulling off, it helps to save fuel and reduce emissions. There is also a green ‘Econ’ button which when engaged mutes throttle responses and retards the air conditioning to save fuel -plus the CR-V indicates when it is the optimum time to change up or down a gear.

Honda has never said the that CR-V is a real off-roader so don’t expect the CR-V’s 4x4 system to take you too far off road, it is great for on-road re-assurance during inclement weather or up a farm track but you would soon get stuck - as you have no real control over the four-wheel-drive system - i.e. you cannot lock it into four-wheel-drive but it is more advanced than its predecessor with electronic torque distribution rather the mechanical system on previous models.

As standard the EX petrol model we were testing runs on 18” alloy wheels with 225/60R18 profile tyres; we found the suspension is compliant and the ride is good. But the steering is over assisted and where that might suit some it doesn’t give enough feedback to make for spirited driving. Body roll is pretty much kept in check on all but the most demanding of roads, but then you wouldn’t expect hot hatch handling from an SUV.

In summary the petrol engine is refined and is a proven reliable unit, the only real issue is fuel consumption which can be on the high side, if you work the engine hard which is the case if you need to make rapid progress.

This is a 8-year+ news article, from our Honda archive, which dates back to the year 2000.

If in doubt check with your local Honda dealer as car prices and technical data will have changed since 2013.