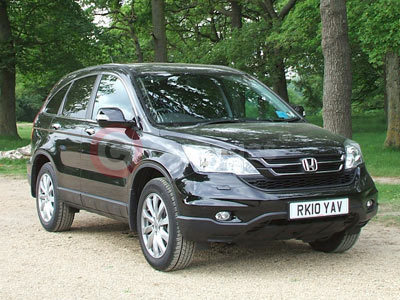 The Honda CR-V was first launched in 1995 at the Tokyo Motor Show and is said to be one of the first modern 'off-roaders'. However, it wasn't until 1997 that the Honda CR-V made it to the European markets and to many, it was well worth the wait.

Here was a well equipped vehicle with off-road capabilities but without the extra gubbins that traditionally came with the extra traction. For once you could have your cake and eat it or, if you prefer, car-like looks and driving characteristics with enough off-road oomph to get the horsebox or caravan across a muddy field.

Sales figures indicated that the Honda CR-V was a hit and in 2002, the second generation model was launched, still offering on-demand 4WD via a Dual Pump system, plus the added benefits of good fuel economy and more interior space.

In 2005, the petrol-engined Honda CR-V was one of the best-selling SUVs in the UK and the range increased to include Honda's acclaimed i-CTDi, diesel engine…remember ‘hate something, change something'? At the same time the Honda CR-V saw a revamp ahead of the 'all-new' model that arrived two years later.

Three years on and the Honda CR-V is still proving that 'not all 4x4s are the same' and, along with the 2010 styling revisions, Honda is still majoring on the diesel engine/automatic transmission combination, which has proved so popular with fleet and private buyers alike.

So, the 2010 Honda CR-V is equipped with a new automatic gearbox and a cleaner, more powerful diesel engine amongst other things but let's start with first impressions.

The new car has a certain American look about it, which is very different to the old model. That is odd because in essence not a great deal has changed. However, the small changes have clearly had a big effect, giving the Honda CR-V a much more powerful, if multi-faceted appearance.

In detail, there is a new front bumper with a dark plastic undertray that kicks up in the middle section, around the protective skid plate. This becomes almost invisible on the black car, which makes it look almost menacing.

Above the bulky bumper, the baseline of the headlight clusters flows down to the honeycomb front grille, similar to that of Honda's Type-R vehicles. The two wavy lines of undertray and lower front grille almost meet below the extended bonnet, emphasising the wide stance.