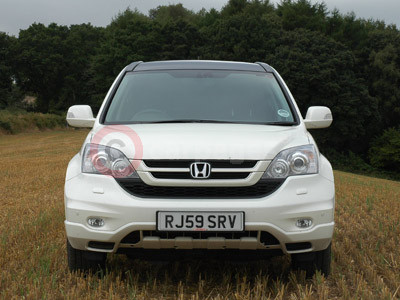 Launched in January 2007 the New Honda CR-V is the third generation of the very popular SUV to be built in the UK at Honda's Swindon plant. The first generation Honda CR-V was launched in Japan in 1995, with sales beginning in Europe in 1997, ending in 2001 - when the second generation was introduced, which had a life of five years.

For 2010 the popular British-built Honda CR-V has been revamped with enhanced styling and a new powertrain and transmission. After listening to customer feedback, the new model builds on the strengths of its predecessor's car-like handling, frugal economy and premium specification.

The 2.2 i-DTEC diesel engine delivers 150PS at 4,000 rpm (up 10PS on the i-CTDi) and peak torque has also increased by 10 Nm to 350Nm at 2,000 rpm. Together both power and torque improvements provide smoother acceleration, with the diesel automatic Honda CR-V completing the 0-62 mph sprint in 10.6 seconds and it has a top speed of 116mph.

Fuel economy for the diesel automatic Honda CR-V remains good reporting a combined cycle figure of 38.2mpg. However, we found that this was only about 8mpg more than our own Honda CR-V petrol automatic.

Since creating its first diesel engine in 2004, Honda's intention was to produce a high quality automatic gearbox in-house, rather than compromise the performance of its i-DTEC engine by mating it with an externally supplied transmission.

The result is a responsive 'box that's both smooth and sporty with practically zero lag between kick-down and gear shift. The Honda CR-V's new diesel automatic transmission offers added comfort for towing, motorway munching as well as urban driving.

We did find the diesel engine a little noisier than our petrol automatic Honda CR-V which is virtually silent at tick over, but this is to be expected, and with improved NVH levels with increased sound deadening around the engine and cabin you can hardly hear it from inside the cabin once on the move. We found that the diesel engine coupled to a 5-speed automatic gearbox was smooth, powerful and overall a better drive than its petrol sibling.

The ride and handling is superb and the new Honda CR-V offers a flatter ride, with greater stability, because the centre of gravity is low in comparison to some other SUVs. Lower engine mountings, repositioning the spare wheel beneath the rear floor, and reduced weight of certain items such as the tailgate and bonnet allow for this.