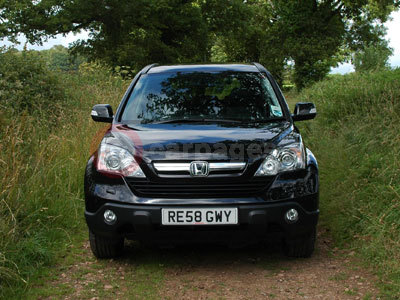 Launched in January 2007 the New Honda CR-V is the third generation of this popular SUV to be built in the UK at Honda's Swindon plant.

The first generation Honda CR-V was launched in Japan in 1995, with sales beginning in Europe in 1997 and ending in 2001 when the second generation model was introduced, which had a life of five years.

The new model offers a choice of either a petrol or diesel engine: the petrol engine is a new 2.0 litre i-VTEC unit producing around the same output as its predecessor, but offering better performance figures. The 2.0 litre petrol engine can be mated to either a new 5-speed automatic or a new 6-speed manual gearbox.

The 2.2 litre i-CTDi diesel engine is currently only available with a 6-speed manual gearbox, which is a modified unit used in the Honda Accord but this is soon to change with the diesel Honda CR-V being fitted with the automatic gearbox from the Accord - watch this space!

There is a choice of three trims levels SE / ES / EX, starting from £19,725 for the SE 2.0 manual petrol through to £26,210 for the top of the range diesel model, the EX 2.2 i-CTDi manual. All cars are generously equipped with air conditioning, VSA (Vehicle Stability Assist) and anti-lock brakes. Top of the range EX models are also equipped with leather upholstery, DVD Satellite Navigation, reversing camera, Bluetooth phone integration and electric driver's seat.

In October 2008 we tested a petrol automatic Honda CR-V, which inspired us to buy one, but now it is time to road test the Honda CR-V 2.2 i-CTDI six speed manual.

Currently there are two UK Honda CR-V engine options: petrol (manual or automatic) or diesel, currently only available as a six speed manual, although an automatic option is on the horizon for 2010.

These performance figures are similar to the manual petrol model but this is where the similarities end. The diesel model can achieve around 10 miles more per gallon and on the road the car feels much quicker especially the low down delivery of torque, but it cannot match the silky smooth i-VTEC petrol engine and it does feel slightly gruff at times with its characteristic diesel chatter, but you do get used to it.

Honda quotes an urban fuel consumption figure of 34.9 mpg, 49.6 mpg extra urban and 43.5 mpg combined. We found that during mixed touring we were achieving circa 39.8 mpg and on a relaxed motorway cruise this increased to 43.1 mpg.

Honda's response to the anti-urban 4x4 lobby is that the new Honda CR-V is about the same size as a family estate (but on stilts), and that for most of the time it runs in front-wheel drive mode only, using less fuel and producing lower CO2 emissions than lots of 'ordinary' cars.