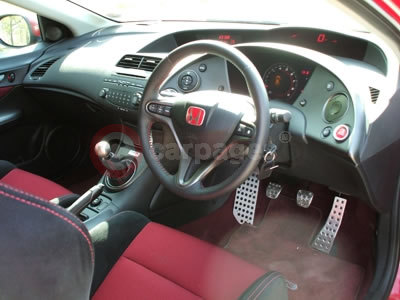 Briefly, the system works by opening the valves wide when maximum performance is demanded and at slower, town speeds, it minimises the valve opening at lower revs. This is done by multiple cams which come into play depending on the engine speed. Basically, the camshaft has two extra ‘lobes’ for the higher revs while the usual four (one for each cylinder) take care of the lower range associated with urban driving.

It used to be that the transition or switch-in point from low to high cams came in with a pulse, a long way up at around 5,800rpm, which took some reaching under normal circumstances but now it is a bit more subtle and occurs at a more attainable, 5,400rpm, just before the peak torque point. That doesn’t mean that all the pulling power is in the top half of the gauge as 90 per cent of the Nm's are available at 2,500rpm but you don’t get the delicious noise down there. And therein lies the problem.

Although the new Type R is heavier than its predecessor it is still as quick - scarily so. The 0-62mph time of 6.6 seconds doesn’t do it justice and your sense of speed becomes strangely lacking. One minute you’re doing 30mph and a glance at the digital speedometer only a nanosecond later will surprise and horrify. It is a good job that the readout is high-level because you have to keep an eye on it all the time, while your right foot tells you fibs. The top speed remains the same at 146mph.

The ‘R’ was introduced by Honda Motorcycles to denote performance or 'R' for racing, if you prefer. But it was in 1992 that the NSX became the first car to bear the badge, with a little help and advice from one, Ayrton Senna. The ethos is simple; a Type R must have an exhilarating drive similar to that of a racing car, loads of feedback, above average functionality from gear changes, braking and handling and ‘the driving experience should not be interfered with by intrusive driving aids or excessive sound-proofing that could detract from the driver’s involvement’. Job done then.

Honda’s engineers looked at the chassis dynamics and suspension with a view to giving it a more pleasant ride, whether commuting or playing on the open road. This was especially aimed at the UK because we buy more Type R's than any other European country. The result is a ride that is so firm that a twig under the standard, 18-inch wheels feels more like a small branch, which can be quite uncomfortable and tiresome after a while.

The upside is the amazing stability and agility on fast bends and winding country roads. The whole package, including the steering, is so very precise that, when turning a corner, it feels as if the car pivots on a rear wheel.