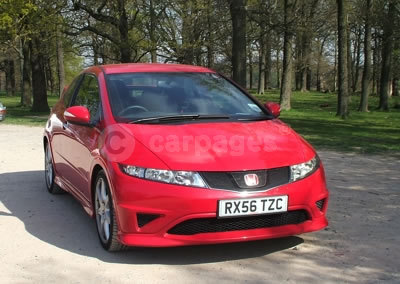 The new Honda Civic has a lot to live up to as the old one was brash, belligerent and brazen. But oh so good!

But amazingly that was seven years ago. It did receive a facelift and a new lighter flywheel in 2004 but it was more or less the same car. The new one, of course, has a different starting point and I was quite intrigued to find out how the new style Civic would make the transition from family car to one of the better ‘hot hatches’.

From the outside there isn’t much difference to the standard car, save for the skirts, which look a tad ‘Airfix’. But the company tells us that the latest Type R is ‘more refined’ and ‘easier to use every day’. So it’s supposed to be a little quieter, more comfortable and with more on-board goodies, but it is still manic.

The people at Honda listened carefully to the criticisms and praises and decided not to change too much but keep the best bits from the old Type R and improve on the bad points, which is always a good way forward.

For instance, in an ‘if it ain’t broke…’ approach, the 2.0-litre petrol engine has been retained but with a few tweaks for better range. It now produces 210PS (198bhp) way up there at 7,800rpm and the 192Nm (142lb ft) doesn’t peak until 5,600rpm. It is only a slight improvement as the power, which has increased by 1PS is available up to 400rpm later than before and although the torque has dropped by 4Nm it peaks 300rpm earlier than the previous car. So there’s a greater spread.

What has changed is the way that the VTEC high-lift operates. VTEC is short for Variable Valve Timing and Lift Electronic Control system and was specifically developed to achieve 100bhp per litre. The VTEC system was originally designed for the 1989 Integra, in which it managed to reach the goal by producing 160bhp from a 1.6-litre engine. It was later adapted for use in the excellent NSX and the Accord.