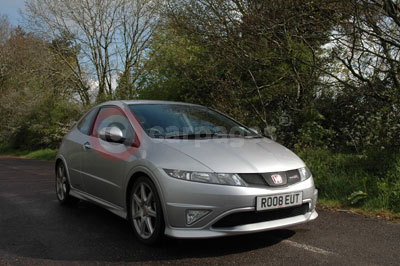 There have been a number of Type R Honda’s released, from the 1992 NSX-R through to the first Civic Type R built at Swindon (UK) in 2001. The CTR as it has become known by enthusiasts is powered by a 2.0-litre i-VTEC engine that produces 197bhp at 7,400rpm. The first generation Honda Civic Type-R went on to sell over 35,000 units and pick up numerous awards.

In February 2006 we were shown a new concept Type R based on the new Honda Civic 3-door at the Geneva Motor Show.  By September of that year Honda unveiled the production version of the 2007 Civic Type R at the Paris Motor Show. This is the latest Civic to wear the Red H badge and is billed as more refined, easier to use everyday and features a reworked version of the 2.0-litre i-VTEC engine. Power is marginally increased to 201PS and the suspension is tuned to give crisper handling and sharper steering response.

Honda should be commended for listening carefully to the input of the loyal existing Type R owners, who had an important hand in shaping the new car, so that they got the car they wanted to own and drive.

There aren't any engine options although there are two trim levels the Type R and Type R GT. For an extra £1000 over the £18,000 Type R the GT offers curtain airbags, cruise control, dual zone climate control and a few other bits and pieces. We drove the Type R GT; therefore this review applies to that specification car.

The Honda Civic Type R is powered by a 2.0-litre i-VTEC engine which can famously be revved all the way up to an ear screeching 8,000 rpm. If you drive the car below 5,400 rpm it remains as docile as a quick family saloon, power it over 5,400 rpm and when the cam lifts all hell is let loose. Which in practice, means, that when you pull off at the lights you may feel a little embarrassed as lesser cars can get the low down edge, although when you reach 5,400 rpm you can wave good bye to them. Of course this does mean to get the most out of the engine you do have to work the gear box a bit more than usual but then that is the fun of driving a Civic Type R. If you are worried about the reliability of such a high revving engine, the 2.0-litre i-VTEC has proven to be one of the most reliable engines ever produced.