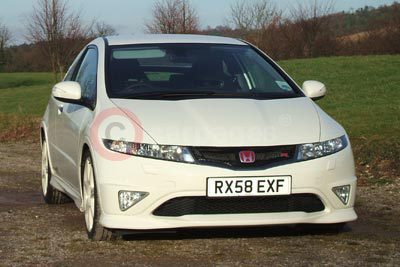 "You won't drive it fast, will you?" asked Dave, the delivery man. "Of course not", said I. It's a good job that we were both joking because it is almost impossible to drive the Honda Civic Type R GT in any other way - when conditions allow, of course.

For enthusiastic drivers, the Honda Civic Type R never fails to delight and testing the Championship White version was merely an excuse to do it all again. It is also another opportunity to tell anyone who will listen, just what they are missing.

The Championship White paintwork is simply icing on the cake and seeing it in the car park, it does indeed look like some sort of confection. As the name suggests, the emphasis is on white, including the 18-inch Championship White alloys, through which can be seen the Type R brake callipers and come complete with a red Honda logo on the hubs.

Apart from that, the Honda Civic Type R Championship White is distinguishable by body-coloured bumpers, door mirrors, rear spoiler and what is described as lower side, sill garnish. The rear skirt incorporates the two triangular tailpipes and the low, front skirt somehow manages to miss scraping speed bumps. Contrasting smoked chrome finish can be seen on the door handles, fuel cap, badges and an exclusive Type R plaque.

But what does the Championship White represent? Way back in 1992 a certain Ayrton Senna had a hand in developing a race performance version of the NSX, Honda's answer to the Ferrari. The result was the Honda NSX-R and the first Type R was born. It was finished in Championship White paint and the Red 'H' emblem in honour of the first Honda F1 car to win a Grand Prix in 1963, the RA272.