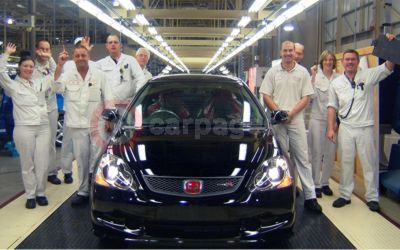 This week saw the last of Honda's legendary and hugely successful Civic Type R's coming off the Swindon production line, the last of more than 35,000 built there.

Civic models are built in more than 10 plants around the world. Type R however is unique to Honda of the UK Manufacturing where every single one has been made since 2001.

Type R set a trend for hot hatches, the first to hit 200PS (197bhp) and priced aggresively to shake up its sector. It topped the charts consistently from launch and was What Car? Hot Hatch Of The Year, three years running from 2002 to 2004, BBC Top Gear's Best Hot Hatch 2002 and Auto Express's Best Sporting Car 2003.

With power transmitted through a 6-speed, close-ratio manual gearbox, the Type R achieved 0-62 in 6.8 seconds and a maximum velocity of 146 mph.

Over the last four years various improvements have been made including LED indicators mounted in the door mirrors and a lightened flywheel which helped reduce the 0-62 sprint by 0.2 seconds. The cult following the car has attracted since launch has meant that used Type R's retain 60% of their value after 3 years/ 36,000 miles, outperforming much of the competition.

Civic Type R has been a massive sales success for Honda - in total 35,190 have been made and sold, 18,033 in the UK, 12,422 in mainland Europe and 4,735 exported to Japan. A measure of Type R's success was the original UK sale forecast for 1,500 cars per annum: sales grew to over four times that amount and the car has remained a firm favourite with the Press and enthusiasts alike.

The last car, in Nighthawk Black, was produced for a UK customer who takes delivery next week.