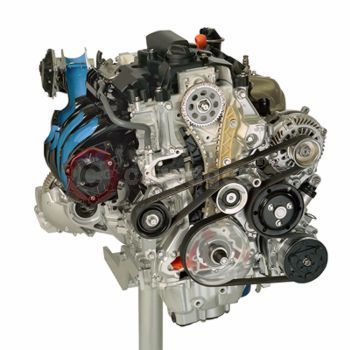 Honda Motor Co., Ltd. today announced that it has developed a new 1.8 i-VTEC engine to be introduced in the new Civic that achieves both more powerful performance and improved fuel economy. The engine employs an intelligent VTEC system that switches the valve timing for maximum efficiency during startup and acceleration to achieve powerful, torquey performance, then delays intake valve closure timing during cruising and other low-load conditions for improved fuel economy. Use of the valve timing control system results in off-the-line acceleration performance equivalent to a 2.0-litre engine, fuel economy better than the current 1.6-litre Civic engine, making it one of the world’s most efficient 1.8-litre engine designs. During cruising, the new engine achieves particularly high fuel economy, on a par with that of a 1.5-litre engine.

Under low-load conditions on conventional engine, the throttle valve is normally partly closed to control the intake volume of the fuel-air mixture. During this time, pumping losses are incurred due to intake resistance, and this is one factor that leads to reduced engine efficiency. With the i-VTEC engine, however, intake valve closure timing is delayed to control the intake volume of the air-fuel mixture, allowing the throttle valve to remain wide open even under low-load conditions for a major reduction in pumping losses of up to 16%. Combined with comprehensive friction-reducing measures, this results in a significant increase in fuel efficiency for the engine itself.

A DBW (Drive By Wire) system provides high-precision control over the throttle valve while the valve timing is being changed over, ensuring smooth driving performance that leaves the driver unaware of any torque fluctuations. Other innovations include a variable-length intake manifold that delivers optimum inertia effect to further improve intake efficiency and piston oil jets that cool the pistons to suppress engine knocking, for powerful torque at rpm ranges typical in normal driving. The new engine delivers a high level of performance, with maximum output of 103 kW (140 PS) and maximum torque of 174 Nm (17.7 kgm). It also delivers cleaner emission performance, employing a 2-bed catalytic converter positioned immediately after the manifold and high-precision air-fuel ratio control to achieve low emission levels.

The Civic has a tradition of featuring new technologies. In 1974, the world saw the introduction of the CVCC engine - a revolutionary powertrain incorporating a revolutionary technology of drastically reducing emissions without the use of a catalytic converter. The original VTEC technology that variably controlled engine valve timing, to achieve both high fuel efficiency and high output, was introduced into the Civic model in 1989.

With the application of the 1.8 i-VTEC engine into the new Civic, Honda keeps up the tradition of introducing advanced technology into cars of affordable price segments, contrary to the general trend in the industry to adopt a “top-down” approach.