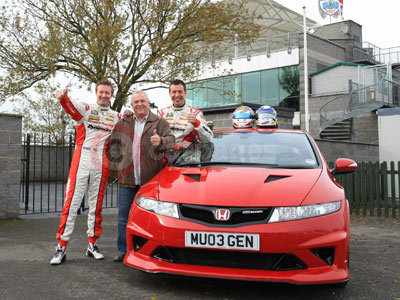 Honda (UK) has given away the original Honda Civic Type R MUGEN Concept car, which was hand-built as a test bed for the 20 units created by Honda's race engine-tuning partner MUGEN.

The one-off concept car, worth over £60,000, was given away following a nationwide prize draw to celebrate Honda's participation in the British Touring Car Championship.

The highly-tuned 240PS Honda Civic was handed over to winner Jim Morgan from Manchester at Silverstone circuit, where Jim met Honda's BTCC drivers Matt Neal and Gordon Shedden and was treated to some hair-raising passenger laps around the circuit. He then visited the MUGEN workshops in Northampton where he toured the factory and met the team of specialists who created his unique car, which features increased power, torque and razor-sharp handling.

"I still can't quite believe I've won this unbelievable concept car," said Jim. "To meet Matt and Gordon, rocket around Silverstone in a Type R, and talk to the guys who built my car was incredible! Seeing how this the Type R MUGEN was built really gives you a feel for how special it is: the guys at MUGEN have put everything they've got into this car.

"It really is a great car to drive; perfectly well behaved around town but with a fantastic response to a heavy right foot! I feel extremely lucky," he continued.

The competition, which attracted more than 24,000 entries, ran online and fans could also enter in Honda dealer showrooms and at the BTCC circuits during the season.

A limited edition Honda Civic Type R MUGEN 200 in Championship White paint, based on the concept car won by Jim Morgan, is available through Honda's dealer network. Honda is developing its plans for the 2011 BTCC season which will again see Matt Neal and Gordon Shedden competing in the Swindon-built Honda Civic.