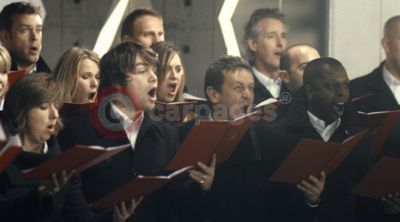 Following hot on the heels of Honda’s ‘Impossible Dream’ brand campaign, ‘Choir’ is a 120 second live action advert produced by Wieden and Kennedy, London. It hits TV screens for the first time on Friday 13 January, 2006.

The commercial begins with the choir standing in a multi-storey car park, about to embark on a musical piece. As the visuals swap to the Civic’s ‘Engine Start’ button, the choir begins its composition - and every sound it makes is an accurate representation of the sound the car makes, everything from driving over gravel to the windscreen demisting on a frosty morning. The visuals move throughout the commercial from the choir performing to the driving experiences they are replicating.

Matt Coombe, Marketing Communications Manager for Honda (UK) says: "The new Civic is a true driver’s car which we hope will put emotion back into driving again. Honda’s aim was not to produce a car that would simply take you from A to B, but to make sure you enjoy every drive you take.

"The new campaign had to be about feeling the new Civic," continues Coombe. "To make sure the creatives at W&K understood this we arranged for them to drive the car for themselves so they could get as close to it as possible in order to convey not only the innovative new design of the car but most importantly what it feels like to drive."

Kim Papworth, creative director at Wieden + Kennedy London adds: "Honda’s new Civic is all about driving feeling. Music is all about feeling. So we thought having a choir "singing" driving could be amazingly powerful and emotional. The aim of the commercial was to find a way of expressing the human experience of driving - not just the big, fast, powerful sounds but also the more subtle sounds of driving - the sound of an electric window closing or a Biro rolling across the dashboard. The sort of moments that never get spoken about but that everyone feels."

Production of the commercial began with the team recording the new Civic to ensure the sounds the choir made were faithful to the real sounds of the car. The next stage was to gather 10 singers to experiment with the various sounds. This involved a complex process of taking one sound at a time and breaking that down into different component sounds. These individual sounds were then orchestrated for the choir so each member was voicing a different part. This was an extremely long and challenging process and had to be repeated for every single sound in the commercial, and then learnt by the choir. The whole process took six months from recording the sounds of the choir, experimenting with a small choir, and then rehearsing with the whole choir and learning the final piece of music.

The 120 second commercial will run in complete form for one week and will then be supported by 60 second and 40 second cutdowns. A website and interactive TV application will support this activity and a national press ad will run in motoring press. The commercial was shot in both Spain and England. It was written and art directed by Matt Gooden, Michael Russoff and Ben Walker. It was directed by Antoine Bardou-Jacquet at Partizan.

This is a 15-year+ news article, from our Honda archive, which dates back to the year 2000.

If in doubt check with your local Honda dealer as car prices and technical data will have changed since 2006.