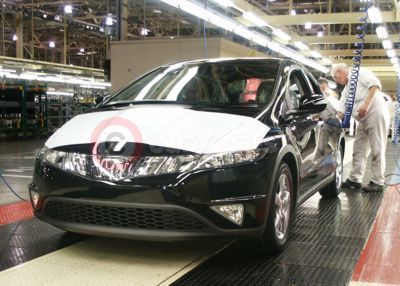 Today, 13th October, Honda of the UK Manufacturing Ltd (HUM) reached a major milestone as mass production of the 8th generation Civic, a unique 5 door hatchback for Europe began at its £1.33 billion production operation in Swindon, Wiltshire. Mass production begins just seven months after the concept version was unveiled at the Geneva Motor Show, underlining the company's long term commitment to building cars in the UK.

The new car is scheduled to go on sale in January 2006, with other new models in the Civic range to be launched over the next 12 months. It is expected to boost European sales of the Civic series by as much as 50% within the next two years. In Britain Honda expects to sell more than 35,000 Civics in 2006.

Civic is Honda’s mainstay model in Europe, currently accounting for over 30% of sales. Honda has specially designed the eighth generation with a ‘no compromise’ approach for the European market.

Underlining the maturity of Honda’s UK car and engine manufacturing operations, the start of volume production of this new Civic at Swindon will be the first time that the plant has progressed a new model to mass production in the UK, without the car being produced in a Japanese parent plant, a testament to the engineering skills of Honda's 4,000 Associates at the site.

Mr Shigeru Takagi, President of Honda Motor Europe, commented, "Our goal has been to create a car that revolutionises the market, a product that makes other cars look outdated. We have made no compromises in the development of this vehicle and in every way the all new Civic represents a dynamic shift towards the premium end.

"The British-built Civic has a key role to play in our model line-up as we expect to be selling 120,000 Civics in 2007; a 50 per cent increase on current sales. For Honda’s European operation, this is the most important launch in its history."

"The launch of new technology in the UK is something we can all be proud of and I am delighted to be here in Swindon today to join in the celebration of the launch of the new Honda Civic and for the start up of production of diesel engines on the same line as petrol engines-a first in the UK.

"We owe companies like Honda a huge vote of thanks as their investment and commitment to the UK has bought us new manufacturing technologies, innovation, skills and a commitment to quality.

"The Government recognises that we must constantly invest in R&D into new products and technologies and in particular to be leaders in the development of new low carbon technologies if our industry is to remain a global player and attract and retain investment."

A second engineering ‘first’ is the company’s production start-up of diesel engines on the same line it currently uses to produce petrol engines - seen as unique in the British Car Industry.

Honda in Swindon started building cars in 1992. Today will see production of the 1½ millionth car, clearly demonstrating their long term confidence in UK Manufacturing and Swindon, in particular, as a centre of excellence.