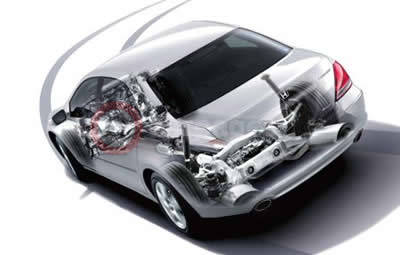 Next month’s Geneva Motor Show will be the setting for two new stars from Honda - the world premiere unveiling of what the next generation Civic for the European market will look like and the all-new Legend saloon.

The "Civic Concept" provides a close indication of how the eighth generation production version of Honda’s model will look. Executed as a five-door hatchback design, it has a sleeker, sportier and more sophisticated appearance which will take the model into "premium" C-segment in Europe.

The final production version of the new Civic will make its public debut at the Frankfurt show in September before sales begin across Europe from January 2006. The New Civic will be built exclusively at Honda’s European manufacturing plant in Swindon, UK.

Also appearing on the stand is the Honda Legend European Prototype, which will include the world’s most advanced four-wheel drive, Super Handling All-Wheel Drive system (SH-AWD). The system freely distributes the optimum amount of torque to all four wheels in accordance with driving conditions, resulting in a significant enhancement in vehicle manoeuvrability. The specification of the European Honda Legend has yet to be finalised, but the model is expected to make its sales debut next year.

Honda also takes the opportunity of this Geneva Salon to show the latest diesel-powered Honda with the debut of the FR-V 2.2 i-CTDi, making Honda’s new 6-seater even more practical. Also on display is an accessorised study model for the FR-V.

Making its European debut is the latest version of the FCX, a hydrogen-powered car which uses an in-house developed fuel cell stack. Honda, leading the development of fuel cell vehicles by leasing 20 units of the FCX worldwide, will display the FCX which is the world’s first fuel cell vehicle with capabilities to operate at sub-freezing temperatures as low as -20 degrees Centigrade.