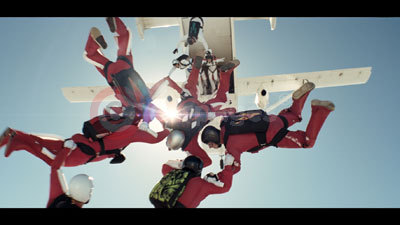 New campaign proves ‘Difficult is worth doing’ with team of skydivers

The three minute live spot – which airs at 8.10pm – will be shown in real-time with no special effects, demonstrating the ‘Difficult Is Worth Doing’ philosophy of Honda’s marketing campaign for its new Accord car.

The campaign continues this Sunday 1st June 2008, when ‘Jump’, the main TV advert, debuts. Filmed in the Mojave Desert, California, the ad features a large team of skydivers attempting to form shapes in the sky that hint at new technologies on the Honda Accord. These shapes include a suspension spring, a camera, a steering wheel; and ultimately the word ‘Accord’.

The live ad takes its lead from this creative – with a team of 19 skydivers attempting to form the letters ‘H’ ‘O’ ‘N’ ‘D’ ‘A’ within the live three minute time limit.

Both ads are based on the wisdom of Honda’s founder, Soichiro Honda, who once said ‘Difficult is worth doing’. This philosophy is expressed through Honda’s new Accord, created by a development team working together to overcome engineering challenges. As well as giving the car a host of technological innovations that improve safety and equipment levels, the engineers “played tug-of-war” with the project budget to ensure the Accord excels in the right areas – maximising the comfort and support of its front seats, for example.

“The campaign has been difficult, but it was definitely worth doing!” says Harry Cooklin, Marketing Communications Manager of Honda (UK). “We are always looking to move the boundaries when it comes to our advertising, and so being involved in the UK’s first truly live TV advert is perfect for us. It provides the ideal platform to take us into the final phase of the Accord campaign.”

Both ads follow a strategy of gradually building momentum and noise for the concept of ‘Difficult Is Worth Doing’ in the run up to the launch of the new car. The first activity broke on 21st April 2008 with a national poster campaign, followed by press and digital advertising. On 12th May 2008, a teaser TV campaign began featuring five short unbranded films depicting seemingly abstract glimpses of a skydiving team preparing themselves for a large event. The only clue as to what company, or product, is behind the short films is a web address at the end www.difficultisworthdoing.com.