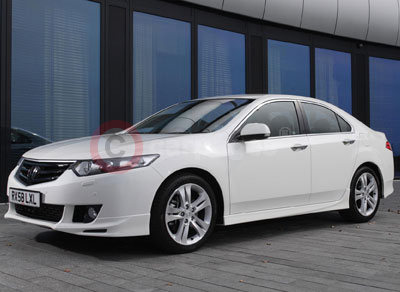 Although it might be a distant memory now, the summer of 2009 was quite eventful for Honda and the Honda Accord in particular. In June 2009, the company got back into second place overall, in the JD Power survey, making it the fourth consecutive year that Honda had been in the top three.

Just over a month later, the Which Car survey voted the 2008 Honda Accord the most reliable with a score of 99 per cent with the Honda Jazz coming in second. In fact four of the top ten positions were taken by Honda vehicles, which says a lot.

But back to the Honda Accord; when the latest generation was launched in 2008, it was declared that there wouldn't be a Type-R version. However, even though there was to be no red-badged Honda Accord, nobody said that a Type-S was out of the question. And so it was that in June 2009 the Honda Accord Type-S was launched, with its much sportier appearance and attitude and equipped with more power and goodies.

The Honda Accord Type-S comes in saloon and Tourer formats and uses the same 2.2 i-DTEC, diesel engine that is available throughout the rest of the range. The difference is that it boasts 30PS more power. The 2008 i-DTEC unit was itself an improvement on the much-acclaimed super-smooth, i-CTDi. As well as being part of the "hate something-change something" campaign, the i-DTEC was also tweaked to comply with the Euro5 regulations that were about to come into force in September 2009, while simultaneously increasing the power output by 10PS.

In short, the standard Honda Accord 2.2 diesel produces 150PS at 4,000rpm and 350Nm of torque between 2,000- and 2,750rpm and for the Honda Accord Type-S version, with its revisions to the turbo-charger and cylinder head, the relative figures are 180PS and 380Nm at the same engine speeds.

At 8.8 seconds, the saloon version of the Honda Accord Type-S is almost a second quicker than its standard counterpart in the 0-62mph sprint and has a top speed of 136mph, which is 5mph faster. The fuel consumption figures remain comparable with returns of 48.7mpg for the Honda Accord Type-S over the combined cycle against 50.4mpg, while the relative CO2 emissions are rated at 154- and 148g/km.