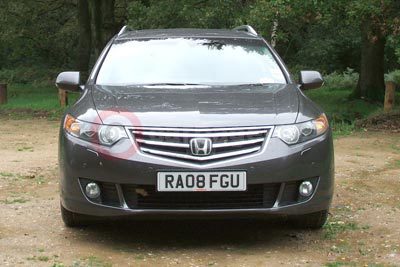 ‘An old man’s car’, is an epithet that is often applied to the Honda Accord and so the company has done something about it. Shrugging off the image while simultaneously, attempting to attract younger, more ‘upwardly mobile’ customers, as we used to call them.

However, in all of this, Honda is very keen to reassure existing customers, saying that the new Accord represents evolution and not revolution - a phrase that is fast becoming a cliché, but an accurate description nonetheless.

Although it retains the essence of the previous Accord, it does have a somewhat meaner, sharper and sportier look about it that will attract younger buyers, and this is especially so of the Tourer. The main differences between old and new, are in the dimensions, with the new version being 80mm wider and, in the case of the Tourer, 30mm lower.

In effect, the Accord has been squashed and the wider, lower stance has the immediate effect of implying a sporty attitude. The design emphasises this impression with more muscular wheelarches, a deep front spoiler and a wide bonnet. Unusually, these days, the headlights don’t extend into the bonnet, giving it more presence.

When it came to design, both inside and out, the idea was to compete with the likes of Audi, Lexus and BMW, particularly in GT trim. To an extent, this works but it remains a Honda and there’s a definite hint of Civic from certain angles. The Tourer carries it off well, with its refined, sleek looks in combination with the roof rails, which on the test car were silver.

The interior has undergone a fair few changes, too, with the layout, styling and materials having seen improvements. Soundproofing, fit and finish have been particularly focused upon, bringing this D-segment car on a par with vehicles at the next level. For a start, the extra body width translates as 65mm more shoulder room and the floor has been lowered slightly for a more sporty driving position with no compromise in terms of legroom.

Larger bolsters on the front seats offer comfort when cruising and plenty of hip-hugging support during more exuberant driving. In the test car, these were leather-clad, heated and both had power adjustment with memory buttons for the driver.

Soft-touch materials cover the transformed fascia, which is quite bulky but cocoons the front occupants nicely. The driver feels even more enclosed, with a relatively high console between the front seats, which houses the gear-shift and a large, multifunctional steering wheel in front.