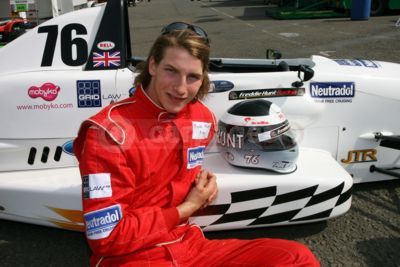 Freddie this week concluded a deal with top Formula Ford team Joe Tandy Racing and, following a successful test at the Leicestershire venue yesterday (Thursday), will take to the track at the wheel of a new Ray GRS07 alongside his new team-mate Nick Tandy.

“I am enormously excited,” said Freddie, “and very pleased to have signed with JTR. Joe and Nick are great guys – I am sure I will learn a lot from my team-mate – and I am very comfortable in the Ray chassis.

“Yesterday was my first experience of Donington Park, and though it’s a hard track I am getting more to grips with it and I’m hopeful I can put up a good show at the weekend.”

Hunt Jnr is still seeking a primary sponsor but has signed deals with several partners to enable him to get on the grid. These include in-car deodorizer Neutradol, motorsport law firm Grid Law, online mobile back-up specialist Mobyko.com and Bell Helmets Europe, who supplied safety helmets to both James Hunt and his brother, David.

Joe Tandy Racing moved into British Formula Ford towards the end of last season with Joe’s younger brother, Nick, leading the driving strength. Wins and podium finishes soon followed and Nick Tandy claimed championship runner-up position. He has started this season as one of the favourites for top honours.

Team principal Joe Tandy, himself the 2005 Formula Palmer Audi Champion, believes Hunt has the flair to be a frontrunner: “We are all very excited to be involved with Freddie and very pleased that he has decided to make his Formula Ford debut with JTR. Obviously there will be a lot of eyes on him at Donington and it will be our job to ensure that he doesn’t feel the pressure too much.

“That said, from what we have seen of Freddie in testing he has a natural talent and a very impressive attitude – I am sure that we will be seeing him at the sharp end of things once he has gained experience.”

Mike Norton, UK Motorsport Manager for Ford TeamRS, added: “Formula Ford is the best breeding ground for Formula 1 stars of the future – half of this year’s Grand Prix grid started with us – and I am sure that Freddie will learn an enormous amount with us, as of course did his father.”

Formula Ford celebrates its 40th anniversary this season: it was conceived in 1967 and surged in popularity. By 1968 there were three separate championships in Britain and two years later that number had grown to seven. Formula Ford reached mainland Europe and the USA in 1969 and by 1971 had spread as far afield as Brazil.

Among the many illustrious names to have graduated from Formula Ford are those of Ayrton Senna, who won two British Formula Ford championships, Nigel Mansell, and the most successful driver in the history of the sport, Michael Schumacher. James Hunt and his fellow F1 Champions Emerson Fittipaldi, Jody Scheckter, Damon Hill and Mika Hakkinen all started in Formula Ford. The most recent graduate to be elevated to the rank of Grand Prix winner is the 1998 Formula Ford Champion, Jenson Button.