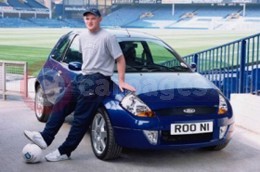 Wayne Rooney ripped up his 'L' plates today (11th August 2003) and took to the road in his first set of wheels, the hot new Ford Sportka.

While polishing his fancy footwork on the pitch, the Everton and England striker has also been perfecting his three-point turn off it. "It's just a huge relief to have passed my test and I'm looking forward to driving myself to training in my new car. All I have to worry about now is the season ahead, starting with a huge game against Arsenal this weekend!"

Rooney shares several of Sportka's qualities. He corners well, has explosive pace and is nimble on his feet in confined spaces! A true one-of-a-kind, both Rooney and Sportka possess a solid and gritty substance to their style.

The Sportka is being officially launched this week, coinciding with the start of the 2003/04 Premiership season. When Rooney started last season as Everton's newest young hopeful, little did he know that within a few months he would become a household name around the UK.

The 17-year-old made such an impact that he progressed through the ranks to become a football hero in just 12 months. Sportka brand manager Usha Raghavachari commented: "We're delighted to have teamed up with Wayne. He is one of England's hottest young talents and he represents everything that Sportka is about."

The most original car on the streets with a zesty 1.6 litre engine under the bonnet that achieves 0-62 in 9.7 seconds, sports-tuned suspension, sleek alloys, flared wheel arches and a rear spoiler -- Sportka defines the next generation of cool hatchbacks.

Sportka is available now in the distinctive 'Imperial Blue' paintwork that fits both player and club so well. Four other sporty colours are also available from the standard Ka range.

Like Rooney Sportka is the total package, a blend of reassuring power and intuitive handling that makes light work of the road ahead.