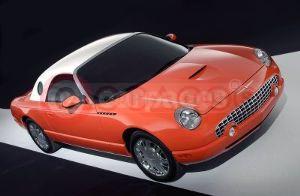 Ford Motor Company is launching a global advertising and marketing campaign in conjunction with MGM Pictures and Eon Productions Die Another Day – building on a long history of partnership between the James Bond films and Ford brands.

The marketing efforts highlight the global range of Ford vehicles in the new film, and the jet-setting characters who drive them. James Bond, played again by Pierce Brosnan, is back in Ford's crown jewel brand, Aston Martin, for the new film – and drives the Aston Martin Vanquish V12 this time around. Academy Award-winner Halle Berry as Jinx will drive the coral-colored Limited Edition 007 Ford Thunderbird – which Ford is making available to customers – and the villainous Zao, played by Rick Yune, drives a Jaguar XKR. Other Ford vehicles appearing in the film include: Land Rover Ranger Rover, Volvo S60 and S80, Ford StreetKa, and two classic cars, including the Ford Fairlane and Ford GT40.

"The strength and breadth of Ford Motor Company's global stable of brands was a prerequisite for being the sole vehicle outfitter for Die Another Day's lead characters," said Jan Valentic, vice president, Global Marketing, Ford Motor Company. "There are few vehicle brands that can exceed Ford's Aston Martin brand in combining British heritage, prestige and the world's most technologically advanced features in a way worthy of being paired with James Bond. In fact, Aston Martin and James Bond represent the longest product association in cinematic history."

There is a Ford vehicle to match the unique image and transportation needs of the film's other lead characters. "There are few cars with a stronger American spirit and sex appeal than the Ford Thunderbird, making it a natural match for the 'Bond girl' persona in Die Another Day. And of course the international allure of our Jaguar XKR makes it the best car for any great escape."

Ford's efforts tap into the fact that Bond characters' personalities are reflected in the cars they drive. "Our marketing efforts are about getting at the 'Bond' in all of us," said Valentic. "Spend one minute in a Jaguar XKR, and you've found it. That's exactly what happens in the Die Another Day XKR ad, where a customer pictures himself in the life of the famed international spy the moment he's in the driver's seat of the Jaguar XKR."

What woman hasn't dreamed of being a Bond girl for a day? "We are putting a special focus on the Bond-girl persona for this film, which represents a first, " said Valentic. "The Limited Edition 007 Thunderbird is the first-ever production vehicle to carry the 007 badge, and it goes to Halle Berry in the film. We also have targeted marketing efforts around the Bond-girl persona, including a partnership with Revlon and a sweepstakes contest that takes customers one step closer to their Bond-girl dreams – by awarding a 007 Thunderbird similar to Halle Berry's in the film."

About The Limited-Edition 007 Thunderbird 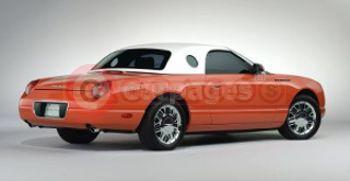 In the U.S., a Limited Edition 007 Ford Thunderbird – one of only 700 to be built – will be the star in a new advertising campaign in conjunction with Die Another Day.

The Limited Edition 007 Thunderbird features unique coral paint, 21-spoke chrome wheels, performance white seats and interior accents, with an understated "007" badge placed on the instrument panel. These Thunderbirds will be the first ever production vehicles to wear a "007" badge. Each vehicle also will feature a numbered, commemorative plaque mounted on the inside of the glove box. The limited edition 007 Thunderbirds will be sold through Ford dealers.