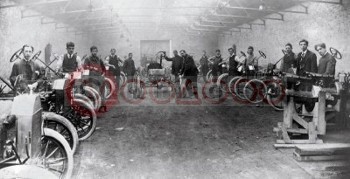 Sales of American-built Fords began in Britain in 1904 with sales of the legendary Model T starting in 1908. Ford established the Ford Motor Company (England) business at Trafford Park in Manchester in 1911 to assemble Model T cars and commercial vehicles. Modern assembly innovations there eventually included the use of a moving assembly line years before this was copied by any other British rival.

Although the Model T's four-cylinder engine was severely penalised by British motor taxation rules, the "Tin Lizzie", as it was affectionately called, still offered remarkable value and soon became Britain's best-selling motor car. It held that title until the mid-1920s. Between 1911 and 1927, no fewer than 301,980 Model Ts were assembled at Trafford Park.