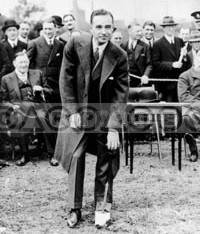 Ben Nevis, close to Fort William in Scotland, is Britain's highest mountain peak. Then, as now, there was no road to the summit but Ford dealer Henry Alexander thought that a Model T could use existing tracks and make it to the top of the mountain. And he was proved correct! It took five days (28.5hours of driving) for the Model T to climb the uncharted mountainside with Alexander at the wheel. Along the way the team had to conquer rocks, marsh ground and (near the peak) snow. And just for good measure Alexander did it again in 1927, this time driving a Model A Ford.

To meet demand for his company's products, Henry Ford decided to build a brand-new factory in Britain. A projected output of 500 vehicles per day was three times the output of the existing manufacturing base in Trafford Park, Manchester, which was already operating to full capacity - and no opportunity for expansion. Henry Ford insisted any location have a deep-water frontage to aid imports of raw materials and exports of completed vehicles. Several sites were investigated but in 1924 the decision was made to buy 310 acres of land for £167,695 on a marshy site near the village of Dagenham in Essex.

Construction work on the new £5 million Dagenham factory began on May 16, 1929. Henry Ford's son Edsel, then president of the company, cut the first sod using a silver spade. History records that the spade hit a stone and bent and it had to be hammered straight before the ceremony could be completed! Edsel's 11 year-old son Henry Ford II was also present. Although the choice of Dagenham was controversial because of the water-soaked nature of the Thames-side land, the public had expressed its confidence in the entire venture by heavily over-subscribing for the shares. The factory would be built on 22,000 concrete piles that had been driven 80 feet into the marshland. When completed in 1931 the factory had its own blast furnace, foundry, jetty and power station.

At the end of World War Two, Dagenham was speedily re-equipped for peacetime manufacture. Although the plant had suffered some bomb damage during the war, this had already been repaired. Component manufacture began again in May 25, 1945, and the first complete car – an Anglia 8hp – left the plant a few days later. Before long full resumption of car, commercial vehicle and tractor assembly had taken place.

Bodies for all cars built at Dagenham were initially supplied by Briggs Motor Bodies, an American-owned concern which set up its own factory close to the Dagenham plant in the 1930s. At first Briggs also supplied bodies to other car makers but by 1953 it was producing solely for Ford. At this point Briggs agreed to sell their operation to the company after an approach by the then Ford chairman, Sir Patrick Hennessy.

Launched as a new product line to fill a marketing gap between the Anglia 105E and the Zephyr/Zodiac models, the Ford Classic was the first Ford car to use the new 1,340cc overhead valve engine. It also featured the distinctive reverse-slop rear window design first seen in the Anglia. Distinguished by a four-headlamp nose style, the Classic was sold as a two-door and four-door saloon with prices starting from £750. The Classic-inspired Capri coupe was a later development. Although it was only in production until 1963, no fewer than 111,255 Classics and 18,716 Capris were sold.

Introduced in 1956, the Consul/Zephyr/Zodiac MkII range was market leader. So popular was the option, introduced in 1960, of front-wheel disc brakes that the company standardised them in May 1961. At the time the Consul was the lowest cost British car to have disc brakes. Before MkII production ended in April 1962, nearly 700,000 examples of all types had been built.

The world's most demanding inter-continental rally started from London in April 1970 and ended six weeks later in Mexico City. Except for the sea voyage from Lisbon to Rio de Janeiro, the cars were on the move all the time and covered 16,000 miles. Ford entered seven factory-backed Escorts with 1.8 litre 'Kent' engines. Hannu Mikkola and Gunnar Palm won the event outright, while other Escorts took third, fifth, sixth and eighth places. To salute this famous victory, a new model, the Escort Mexico, was born.

The Ford-Cosworth DFV V8 formula one engine began its successful career in 1967 and ten years later it was still the dominant power unit in Grand Prix racing. The 50th victory had been achieved in 1972 and only five years later Jody Scheckter recorded the 100th victory in his Wolf-Ford at Monaco. The DFV family would go on to record no fewer than 155 outright successes.

Designed for sale in world markets, the Ford Focus range went on sale in 1998. Available as a saloon, hatchback or estate car, with a range of petrol and diesel engines, it soon rose to the top of the British sales charts and has remained there ever since. Public demand for the Focus, named European Car of the Year in 1999, was so strong that only eight months after its launch, the 250,000th example came off the production line at Ford's Saarlouis plant in Germany.