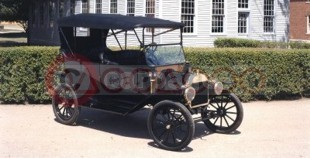 Seventy-four years after production of the Ford Model T ended, Ford Motor Company has built six brand new examples of the car voted "Car of the Century" by an international group of motoring journalists.

The 2003 model year vehicles, identified as Model T-100s, have been hand made and are identical to a 1914 model year original Model T, from the throttle to the engine crankshaft.

The company chose to reproduce the 1914 Model T for a number of reasons. It was the first vehicle built on Henry Ford's innovative moving assembly line, the first vehicle to be offered "in any colour as long as its black" and 1914 was the first year of the revolutionary $5 wage for an eight hour day, replacing $2.34 for a nine hour day.

The cars have been built as part of the company's Centennial celebrations and the last Model T made by Ford Motor Company is now resident in the UK as part of the Ford Heritage Vehicle Collection.

"All the parts in these vehicles are new," said William Leland, Model T-100 project manager.

It took two craftsmen, with the backroom assistance of some 250 engineers and suppliers, two years to source and make the parts and assemble the cars.

The Model T was introduced on October 1, 1908 and ceased production on May 26, 1927. During that time more than 15 million Model Ts were build and sold worldwide, including 300,000 at the company's first plant outside the US, Trafford Park in Manchester.

"The Model T is the car that essentially launched the company," said Ford of Britain chairman Roger Putnam. "With the Model T, Henry Ford put the world on wheels by producing an affordable vehicle for the masses."

The Model T-100 now in Europe will be seen at a number of Ford centennial events this year, including the National Model T Register day when on May 31 when judging of the Ford Model T Challenge restoration competition will begin at the Haynes Motor Museum in Yeovil, Somerset.

Henry Ford and 11 investors signed the articles of incorporation to establish the Ford Motor Company on 16 June, 1903. While the major centennial celebration will be centred on Ford World Headquarters in Dearborn, Michigan, over the weekend of 12-16 June, the largest centennial-themed event outside of the United States will be the Goodwood Festival of Speed to be held on 11-13 July in Sussex with Ford as the featured sponsor.

"Our plans for Goodwood include a spectacular Ford motorsport heritage/centennial presence, including the GT40s which finished in the memorable 1-2-3 formation at Le Mans in 1966," said Daniel Ward, executive director, public affairs for Ford of Britain.

Other centennial-related activities planned for the UK include a Henry Ford Day on May 11 at the British Motor Industry Heritage Trust museum at Gaydon in Warwickshire (www.heritage-motor-centre.co.uk ) which will feature displays from Ford enthusiasts clubs, a display of Ford's own historic vehicle collection, a Ford heritage forum with famous figures from Ford's past talking about their experiences with the company and the chance to see in the Gaydon cinema many of the great productions from the Ford Film Archive.

Ford customers, employees and enthusiasts all have a chance to contribute to Ford's history through the Ford global centennial website accessed via www.ford.com . The "Your Story" section of the website allows site visitors to share their Ford stories, everything from their first Ford product to how the company has impacted their lives. By encouraging Ford enthusiasts worldwide to share their stories, the company has set the goal of creating a rich historical database that cannot be found in traditional historical material.